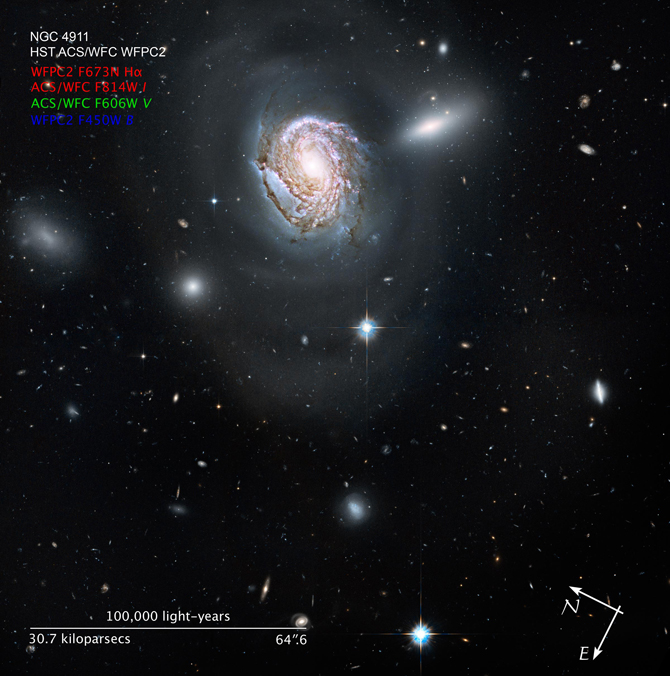 The galaxy, known as NGC 4911, contains rich lanes of dust and gas near its center. These are silhouetted against glowing newborn star clusters and iridescent pink clouds of hydrogen, the existence of which indicates ongoing star formation. Hubble has also captured the outer spiral arms of NGC 4911, along with thousands of other galaxies of varying sizes. The high resolution of Hubble's cameras, paired with considerably long exposures, made it possible to observe these faint details.

NGC 4911 and other spirals near the center of the cluster are being transformed by the gravitational tug of their neighbors. In the case of NGC 4911, wispy arcs of the galaxy's outer spiral arms are being pulled and distorted by forces from a companion galaxy (NGC 4911A), to the upper right. The resultant stripped material will eventually be dispersed throughout the core of the Coma Cluster, where it will fuel the intergalactic populations of stars and star clusters.

The Coma Cluster is home to almost 1,000 galaxies, making it one of the densest collections of galaxies in the nearby universe. It continues to transform galaxies at the present epoch, due to the interactions of close-proximity galaxy systems within the dense cluster. Vigorous star formation is triggered in such collisions.

Galaxies in this cluster are so densely packed that they undergo frequent interactions and collisions. When galaxies of nearly equal masses merge, they form elliptical galaxies. Merging is more likely to occur in the center of the cluster where the density of galaxies is higher, giving rise to more elliptical galaxies.

This natural-color Hubble image, which combines data obtained in 2006, 2007, and 2009 from the Wide Field Planetary Camera 2 and the Advanced Camera for Surveys, required 28 hours of exposure time.