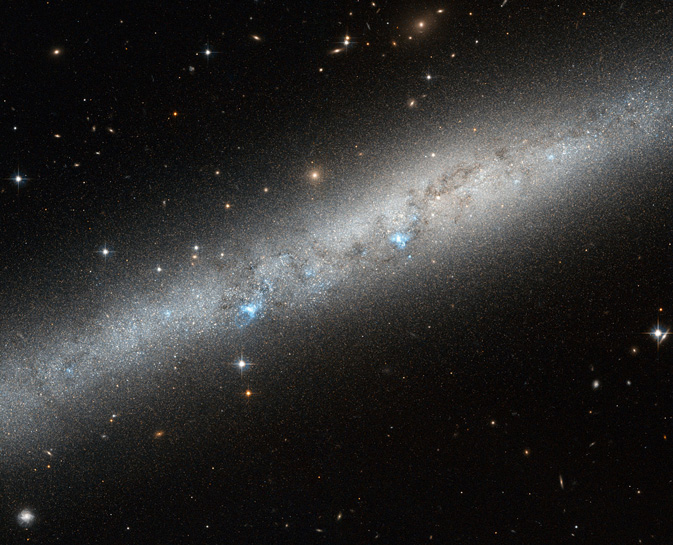 Credit: ESA/Hubble and NASA
Acknowledgement: S. Meunier
› Larger image
This image, speckled with blue, white and yellow light, shows part of the spiral galaxy IC 5052. Surrounded in the image by foreground stars in our own galaxy, and distant galaxies beyond, it emits a bright blue-white glow which highlights its narrow, intricate structure. It is viewed side-on in the constellation of Pavo (The Peacock), in the southern sky.

When spiral galaxies are viewed from this angle, it is very difficult to fully understand their properties and how they are arranged. IC 5052 is actually a barred spiral galaxy: Its pinwheeling arms do not begin from the center point but are instead attached to either end of a straight "bar" of stars that cuts through the galaxy's middle. Approximately two-thirds of all spirals are barred, including the Milky Way.

Bursts of pale blue light are visible across the galaxy's length, partially blocked out by weaving lanes of darker gas and dust. These are pockets of extremely hot newborn stars. The bars present in spirals like IC 5052 are thought to help these formation processes by effectively funneling material from the swirling arms inwards towards these hot stellar nurseries.

The Hubble Space Telescope is a project of international cooperation between NASA and the European Space Agency. NASA's Goddard Space Flight Center in Greenbelt, Md., manages the telescope. The Space Telescope Science Institute (STScI) in Baltimore, Md., conducts Hubble science operations. STScI is operated by the Association of Universities for Research in Astronomy, Inc., in Washington. European Space Agency
› Back To Top