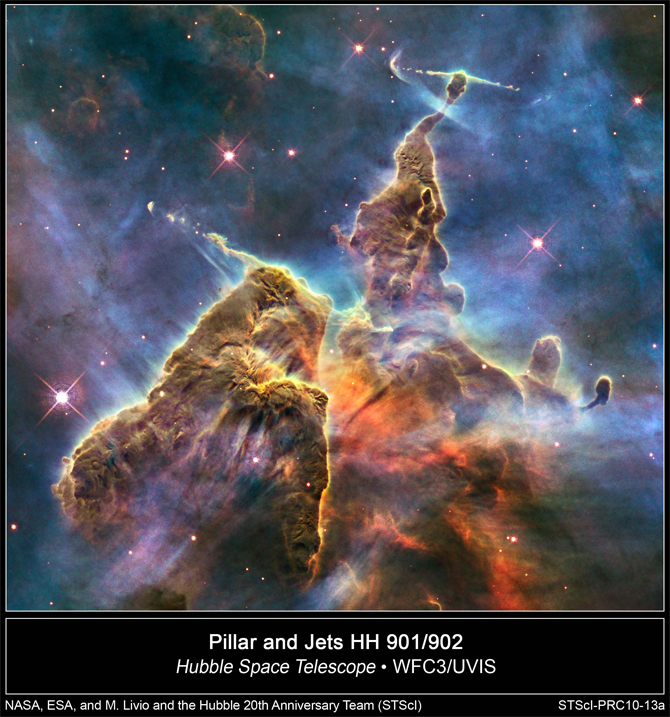 This brand new Hubble photo is of a small portion of one of the largest seen star-birth regions in the galaxy, the Carina Nebula. Towers of cool hydrogen laced with dust rise from the wall of the nebula. The scene is reminiscent of Hubble's classic "Pillars of Creation" photo from 1995, but is even more striking in appearance. The image captures the top of a three-light-year-tall pillar of gas and dust that is being eaten away by the brilliant light from nearby bright stars. The pillar is also being pushed apart from within, as infant stars buried inside it fire off jets of gas that can be seen streaming from towering peaks like arrows sailing through the air. Credit: NASA, ESA, and M. Livio and the Hubble 20th Anniversary Team (STScI)
› Larger image


As the Hubble Space Telescope achieves the major milestone of two decades on orbit, NASA and the Space Telescope Science Institute, or STScI, in Baltimore are celebrating Hubble’s journey of exploration with a stunning new picture and several online educational activities. There are also opportunities for people to explore galaxies as armchair scientists and send personal greetings to Hubble for posterity.

NASA is releasing a new Hubble photo of a small portion of one of the largest known star-birth regions in the galaxy, the Carina Nebula. Three light-year-tall towers of cool hydrogen laced with dust rise from the wall of the nebula. The scene is reminiscent of Hubble’s classic “Pillars of Creation” photo from 1995, but even more striking.

NASA’s best-recognized, longest-lived and most prolific space observatory was launched April 24, 1990, aboard the space shuttle Discovery during the STS-31 mission. Hubble discoveries revolutionized nearly all areas of current astronomical research from planetary science to cosmology. 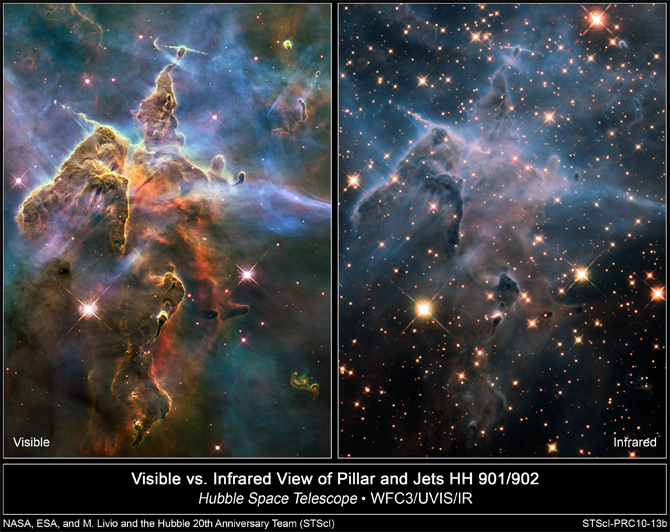 Over the years, Hubble has suffered broken equipment, a bleary-eyed primary mirror, and the cancellation of a planned shuttle servicing mission. But the ingenuity and dedication of Hubble scientists, engineers and NASA astronauts allowed the observatory to rebound and thrive. The telescope's crisp vision continues to challenge scientists and the public with new discoveries and evocative images.


"Hubble is undoubtedly one of the most recognized and successful scientific projects in history," said Ed Weiler, associate administrator for the Science Mission Directorate at NASA Headquarters in Washington. "Last year's space shuttle servicing mission left the observatory operating at peak capacity, giving it a new beginning for scientific achievements that impact our society."

Hubble fans worldwide are being invited to take an interactive journey with Hubble. They can also visit Hubble Site to share the ways the telescope has affected them. Follow the “Messages to Hubble” link to send an e-mail, post a Facebook message, or send a cell phone text message. Fan messages will be stored in the Hubble data archive along with the telescope’s science data. For those who use Twitter, you can follow @HubbleTelescope or post tweets using the Twitter hashtag #hst20. 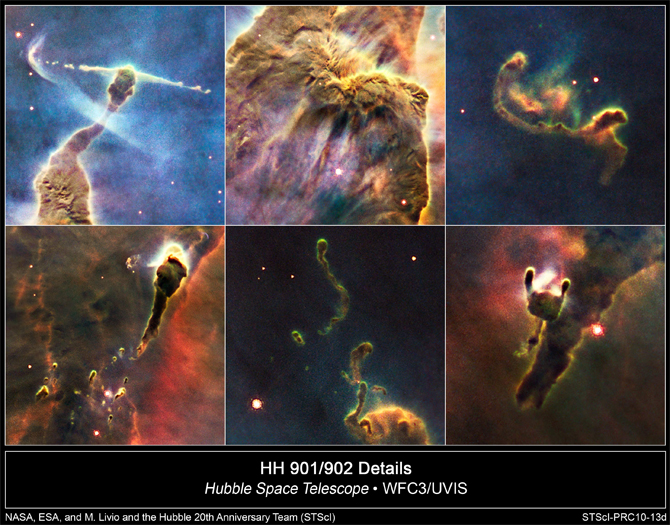 This is a series of close-up views of the complex gas structures in a small portion of the Carina Nebula. The nebula is a cold cloud of predominantly hydrogen gas. It is laced with dust, which makes the cloud opaque. The cloud is being eroded by a gusher of ultraviolet light from young stars in the region. They sculpt a variety of fantasy shapes, many forming tadpole-like structures. In some frames, smaller pieces of nebulosity can be seen freely drifting, such as the 2.3-trillion-mile-long structure at upper right. The most striking feature is a 3.5- trillion-mile-long horizontal jet in the upper left frame. It is being blasted into space by a young star hidden in the tip of the pillar-like structure. A bowshock has formed near the tip of the jet. Credit: NASA, ESA, and M. Livio and the Hubble 20th Anniversary Team (STScI)
› Larger image

The public also will have an opportunity to become at-home scientists by helping astronomers sort out the thousands of galaxies seen in a Hubble deep field observation. STScI is partnering with the Galaxy Zoo consortium of scientists to launch an Internet-based astronomy project where amateur astronomers can peruse and sort galaxies from Hubble’s deepest view of the universe into their classic shapes: spiral, elliptical, and irregular. Dividing the galaxies into categories will allow astronomers to study how they relate to each other and provide clues that might help scientists understand how they formed.

To visit the Galaxy Zoo page, go to http://www.hubble.galaxyzoo.org.

For educators and students, STScI is creating an educational website called “Celebrating Hubble’s 20th Anniversary." It offers links to facts and trivia about Hubble, a news story that chronicles the observatory’s life and discoveries, and the IMAX “Hubble 3D” educator's guide. An anniversary poster containing Hubble’s “hall-of-fame” images, including the Eagle Nebula and Saturn, also is being offered with downloadable classroom activity information.

To date, Hubble has observed more than 30,000 celestial targets and amassed more than a half-million pictures in its archive. The last astronaut servicing mission to Hubble in May 2009 made the telescope 100 times more powerful than when it was launched.