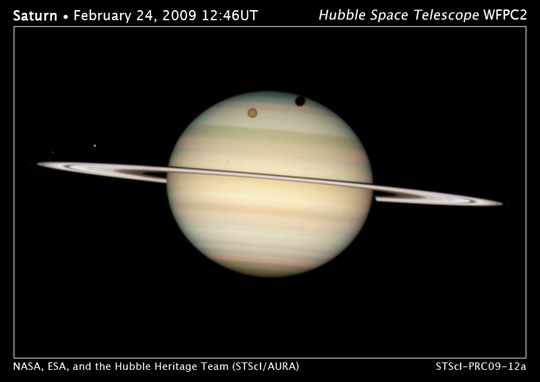 On February 24, 2009, the Hubble Space Telescope took a photo sequence of four moons of Saturn passing in front of their parent planet. In this view, the giant orange moon Titan casts a large shadow onto Saturn’s north polar hood. Below Titan, near the ring plane and to the left is the moon Mimas, casting a much smaller shadow onto Saturn’s equatorial cloud tops. Farther to the left, and off Saturn’s disk, is the bright moom Dione, and the fainter moon Enceledus.

These rare moon transits only happen when the tilt of Saturn’s ring plane is nearly “edge on” as seen from the Earth. Saturn’s rings will be perfectly edge on to our line of sight on August 10, 2009, and September 4, 2009. Unfortunately, Saturn will be too close to the sun to be seen by viewers on Earth at that time. This “ring plane crossing” occurs every 14-15 years. In 1995-96 Hubble witnessed the ring plane crossing event, as well as many moon transits, and even helped discover several new moons of Saturn.

The banded structure in Saturn's atmosphere is similar to Jupiter's.

Early 2009 was a favorable time for viewers with small telescopes to watch moon and shadow transits crossing the face of Saturn. Titan, Saturn’s largest moon, crossed Saturn on four separate occasions: January 24, February 9, February 24, and March 12, although not all events were visible from all locations on Earth.

These pictures were taken with Hubble’s Wide Field Planetary Camera 2 on February 24, 2009, when Saturn was at a distance of roughly 775 million miles (1.25 billion kilometers) from Earth. Hubble can see details as small as 190 miles (300 km) across on Saturn. The dark band running across the face of the planet slightly above the rings is the shadow of the rings cast on the planet.

> Related images and video from Hubblesite.org
› Back To Top