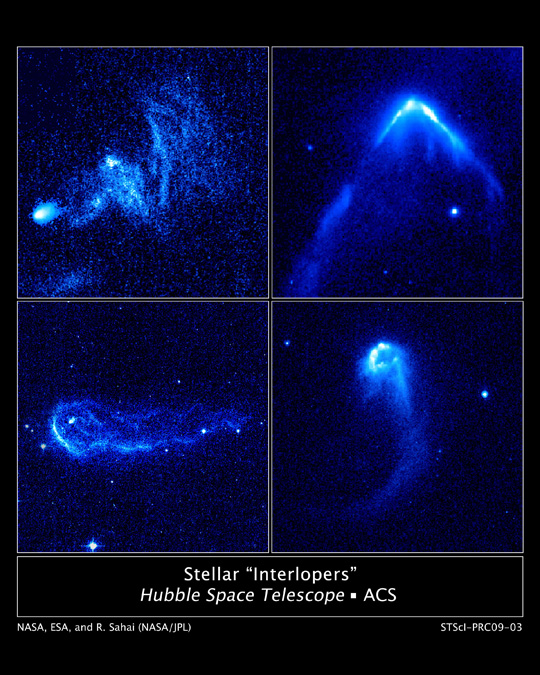 Even some stars go ballistic, racing through interstellar space like bullets and tearing through clouds of gas.

Images from NASA’s Hubble Space Telescope reveal 14 young, runaway stars plowing through regions of dense interstellar gas, creating brilliant arrowhead structures and trailing tails of glowing gas. These arrowheads, or bow shocks, form when the stars’ powerful stellar winds, streams of matter flowing from the stars, slam into surrounding dense gas. The phenomenon is similar to that seen when a speeding boat pushes through water on a lake.

“We think we have found a new class of bright, high-velocity stellar interlopers,” says astronomer Raghvendra Sahai of NASA’s Jet Propulsion Laboratory in Pasadena, Calif., and leader of the Hubble study. “Finding these stars is a complete surprise because we were not looking for them. When I first saw the images, I said ‘Wow. This is like a bullet speeding through the interstellar medium.’ Hubble’s sharp ‘eye’ reveals the structure and shape of these bow shocks.”

The astronomers can only estimate the ages, masses, and velocities of these renegade stars. The stars appear to be young -- just millions of years old. Their ages are based partly on their strong stellar winds.

Most stars produce powerful winds either when they are very young or very old. Only very massive stars greater than 10 times the sun’s mass have stellar winds throughout their lifetimes.

But the objects observed by Hubble are not very massive, because they do not have glowing clouds of ionized gas around them. They are medium-sized stars that are a few to eight times more massive than the sun. The stars are not old because the shapes of the nebulae around aging, dying stars are very different, and old stars are almost never found near dense interstellar clouds.

Depending on their distance from Earth, the bullet-nosed bow shocks could be 100 billion to a trillion miles wide (the equivalent of 17 to 170 solar system diameters, measured out to Neptune’s orbit). The bow shocks indicate that the stars are traveling fast, more than 112,000 miles an hour (more than 180,000 kilometers an hour) with respect to the dense gas they are plowing through, which is roughly five times faster than typical young stars.

“The high-speed stars were likely kicked out of their homes, which were probably massive star clusters,” Sahai says.

There are two possible ways this stellar expulsion could have happened. One way is if one star in a binary system exploded as a supernova and the partner got kicked out. Another scenario is a collision between two binary star systems or a binary system and a third star. One or more of these stars could have picked up energy from the interaction and escaped the cluster.

Assuming their youthful phase lasts only a million years and they are moving at roughly 112,000 miles an hour, the stars have traveled about 160 light-years.

Runaway stars have been seen before. The Infrared Astronomical Satellite (IRAS), which performed an all-sky infrared survey in 1983, spied a few similar-looking objects. The first observation of these objects was in the late 1980s. But those stars produced much larger bow shocks than the stars in the Hubble study, suggesting that they are more massive stars with more powerful stellar winds.

“The stars in our study are likely the lower-mass and/or lower-speed counterparts to the massive stars with bow shocks detected by IRAS,” Sahai explains. “We think the massive runaway stars observed before were just the tip of the iceberg. The stars seen with Hubble may represent the bulk of the population, both because many more lower-mass stars inhabit the universe than higher-mass stars, and because a much larger number are subject to modest speed kicks.”

Astronomers have not spotted many of these stellar interlopers before because they are hard to find. “You don’t know where to look for them because you cannot predict where they will be,” Sahai says. “So all of them have been found serendipitously, including the 14 stars we found with Hubble.”

Sahai and his team used Hubble’s Advanced Camera for Surveys to examine 35 objects that appeared as bright infrared sources in the IRAS archive. They were looking for long-lived pre-planetary nebulae, puffed-up aging stars on the verge of shedding most of their outer layers to become glowing planetary nebulae. Instead, the astronomers stumbled upon the runaway stars.

The team is planning follow-up studies to search for more interlopers, as well as study selected objects from this Hubble survey in greater detail in order to understand their effects on their environment.

“One of the questions that these very showy encounters raise is what effect they have on the clouds,” says team member Mark Morris of the University of California, Los Angeles. “Is it an insignificant flash in the pan, or do the strong winds from these stars stir up the clouds and thereby slow down their evolution toward forming another generation of stars?”

Sahai will discuss his team’s results at an 11 a.m. press conference Jan. 7, at the American Astronomical Society meeting in Long Beach, Calif.

The science team consists of R. Sahai of NASA’s Jet Propulsion Laboratory in Pasadena, Calif., M. Morris of the University of California in Los Angeles, M. Claussen of the National Radio Astronomy Observatory in Socorro, N.M., and R. Ainsworth of the University of Tennessee in Knoxville.