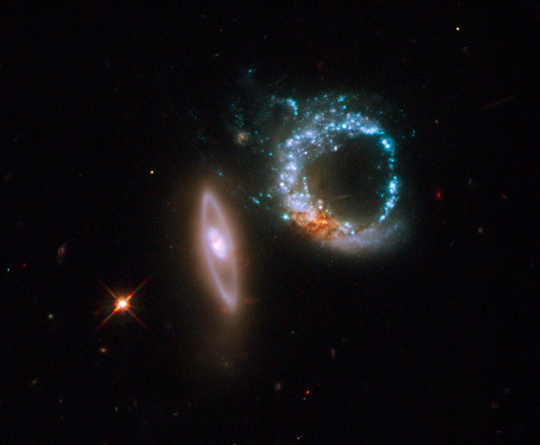 NASA's Hubble Space Telescope is back in business.

Just a couple of days after the orbiting observatory was brought back online, Hubble aimed its prime working camera, the Wide Field Planetary Camera 2 (WFPC2), at a particularly intriguing target, a pair of gravitationally interacting galaxies called Arp 147.

The image demonstrated that the camera is working exactly as it was before going offline, thereby scoring a "perfect 10" both for performance and beauty.

The two galaxies happen to be oriented so that they appear to mark the number 10. The left-most galaxy, or the "one" in this image, is relatively undisturbed apart from a smooth ring of starlight. It appears nearly on edge to our line of sight. The right- most galaxy, resembling a "zero," exhibits a clumpy, blue ring of intense star formation.

The blue ring was most probably formed after the galaxy on the left passed through the galaxy on the right. Just as a pebble thrown into a pond creates an outwardly moving circular wave, a propagating ring of higher density was generated at the point of impact. As this excess density collided with outer material that was moving inward due to the gravitational pull of the two galaxies, shocks and dense gas were produced, stimulating star formation.

The dusty reddish knot at the lower left of the blue ring probably marks the location of the original nucleus of the galaxy that was hit.

Arp 147 appears in the Arp Atlas of Peculiar Galaxies, compiled by Halton Arp in the 1960s and published in 1966. This picture was assembled from WFPC2 images taken with three separate filters. The blue, visible-light, and infrared filters are represented by the colors blue, green, and red, respectively.

The galaxy pair was photographed on October 27-28, 2008. Arp 147 lies in the constellation Cetus, and it is more than 400 million light-years away from Earth.