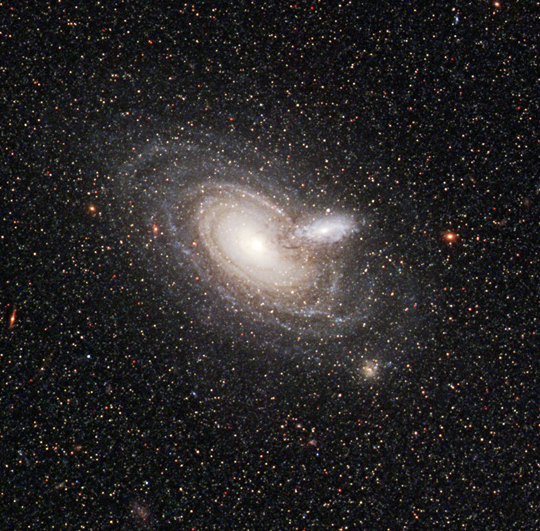 NASA's Hubble Space Telescope has captured a rare alignment between two spiral galaxies. The outer rim of a small, foreground galaxy is silhouetted in front of a larger background galaxy. Skeletal tentacles of dust can be seen extending beyond the small galaxy's disk of starlight.

Such outer dark dusty structures, which appear to be devoid of stars, like barren branches, are rarely so visible in a galaxy because there is usually nothing behind them to illuminate them. Astronomers have never seen dust this far beyond the visible edge of a galaxy. They do not know if these dusty structures are common features in galaxies.

Most of the stars speckled across this image belong to the nearby spiral galaxy NGC 253, which is out of view to the right. Astronomers used Hubble's Advanced Camera for Surveys to snap images of NGC 253 when they spied the two galaxies in the background. From ground-based telescopes, the two galaxies look like a single blob. But the Advanced Camera's sharp "eye" distinguished the blob as two galaxies, cataloged as 2MASX J00482185-2507365. The images were taken on Sept. 19, 2006.

The results have been submitted for publication in The Astronomical Journal.