Three Red Spots Mix it Up on Jupiter 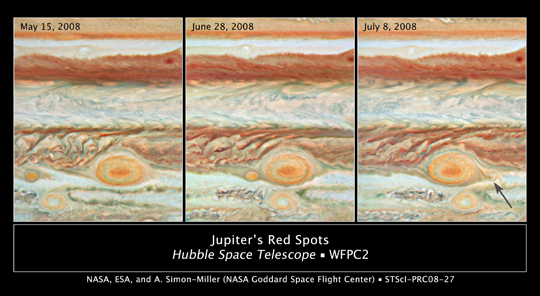 This sequence of Hubble Space Telescope images offers an unprecedented view of a planetary game of Pac-Man among three red spots clustered together in Jupiter's atmosphere.

The time series shows the passage of the "Red Spot Jr." in a band of clouds below (south) of the Great Red Spot (GRS). "Red Spot Jr." first appeared on Jupiter in early 2006 when a previously white storm turned red. This is the second time, since turning red, it has skirted past its big brother apparently unscathed. 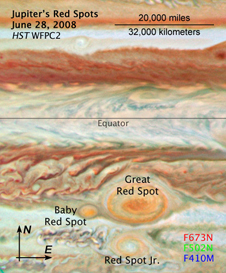 > Larger, labeled image But this is not the fate of "baby red spot," which is in the same latitudinal band as the GRS. This new red spot first appeared earlier this year. The baby red spot gets ever closer to the GRS in this picture sequence until it is caught up in the anticyclonic spin of the GRS. In the final image the baby spot is deformed and pale in color and has been spun to the right (east) of the GRS. (Amateur astronomers' observations confirm that this is the baby spot that migrated around the GRS.) The prediction is that the baby spot will now get pulled back into the GRS "Cuisinart" and disappear for good. This is one possible mechanism that has powered and sustained the GRS for at least 150 years.

These three natural-color Jupiter images were made from data acquired on May 15, June 28, and July 8, 2008 by the Wide Field Planetary Camera 2 (WFPC2). Each one covers 58 degrees of Jovian "latitude" and 70 degrees of "longitude" (centered on 5 degrees South latitude and 110, 121 and 121 degrees West longitude, respectively).

The Hubble Space Telescope is a project of international cooperation between NASA and the European Space Agency (ESA) and is managed by NASA's Goddard Space Flight Center (GSFC) in Greenbelt, Md. The Space Telescope Science Institute (STScI) conducts Hubble science operations. The institute is operated for NASA by the Association of Universities for Research in Astronomy, Inc., Washington, DC.