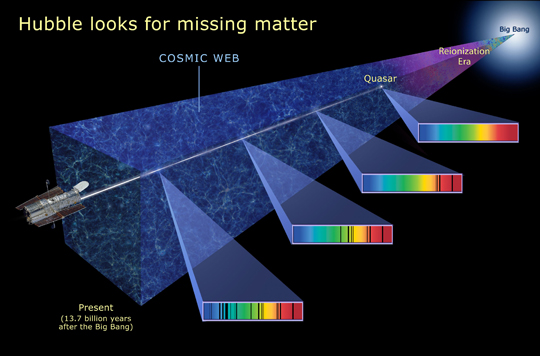 Although the universe contains billions of galaxies, only a small amount of its matter is locked up in these behemoths. Most of the universe's matter that was created during and just after the Big Bang must be found elsewhere.

Now, in an extensive search of the local universe, astronomers say they have definitively found about half of the missing normal matter, called baryons, in the spaces between the galaxies. This important component of the universe is known as the “intergalactic medium,” or IGM, and it extends essentially throughout all of space, from just outside our Milky Way galaxy to the most distant regions of space observed by astronomers.

The questions “where have the local baryons gone, and what are their properties?” are being answered with greater certainty than ever before.

"We think we are seeing the strands of a web-like structure that forms the backbone of the universe," Mike Shull of the University of Colorado explained. "What we are confirming in detail is that intergalactic space, which intuitively might seem to be empty, is in fact the reservoir for most of the normal, baryonic matter in the universe.”

Hubble observations made nearly a decade ago by Todd Tripp and colleagues first reported finding the hottest portion of this missing matter in the local universe. That study used spectroscopic observations of one quasar to look for absorbing intergalactic gas along the path to the quasar.

In the May 20 issue of The Astrophysical Journal, Charles Danforth and Shull report on observations taken along sight-lines to 28 quasars. Their analysis represents one of the most detailed observations to date of how the IGM looks within about four billion light-years of Earth.

Baryons are protons, neutrons, and other subatomic particles that make up ordinary matter such as hydrogen, helium, and heavier elements. Baryonic matter forms stars, planets, moons, and even the interstellar gas and dust from which new stars are born.

Astronomers caution that the missing baryonic matter is not to be confused with “dark matter,” a mysterious and exotic form of matter that is only detected via its gravitational pull.

Danforth and Shull, of the Department of Astrophysical and Planetary Sciences at the University of Colorado in Boulder, looked for the missing baryonic matter by using the light from distant quasars (the bright cores of galaxies with active black holes) to probe spider-web-like structure that permeates the seemingly invisible space between galaxies, like shining a flashlight through fog. 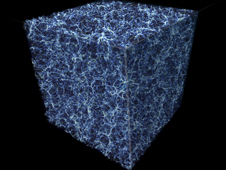 This graphic represents a slice of the spider-web-like structure of the universe, called the "cosmic web." These great filaments are made largely of dark matter located in the space between galaxies. Credit: NASA, ESA, and E. Hallman (University of Colorado, Boulder)
> Larger image Using the Space Telescope Imaging Spectrograph (STIS) aboard NASA's Hubble Space Telescope and NASA’s Far Ultraviolet Spectroscopic Explorer (FUSE), the astronomers found hot gas, mostly oxygen and hydrogen, which provide a three-dimensional probe of intergalactic space. STIS and FUSE found the spectral "fingerprints" of intervening oxygen and hydrogen superimposed on the quasars' light.

The bright quasar light was measured to penetrate more than 650 filaments of hydrogen in the cosmic web. 83 filaments were found laced with highly ionized oxygen in which five electrons have stripped away. The presence of highly ionized oxygen (and other elements) between the galaxies is believed to trace large quantities of invisible hot, ionized hydrogen in the universe. These vast reservoirs of hydrogen have largely escaped detection because they are too hot to be seen in visible light, yet too cool to be seen in X-rays.

The oxygen "tracer" was probably created when exploding stars in galaxies spewed the oxygen back into intergalactic space where it mixed with the pre-existing hydrogen via a shock wave which heated the oxygen to very high temperatures.

The team also found that about 20 percent of the baryons reside in the voids between the web-like filaments. Within these voids could be faint dwarf galaxies or wisps of matter that could turn into stars and galaxies in billions of years.

Probing this vast cosmic web will be a key goal for the Cosmic Origins Spectrograph (COS), a new science instrument that astronauts plan to install on Hubble during Servicing Mission 4 later this year.

"COS will allow us to make more robust and more detailed core samples of the cosmic web," Shull said. "We predict that COS will find considerably more of the missing baryonic matter."

"Our goal is to confirm the existence of the cosmic web by mapping its structure, measuring the amount of heavy metals found in it, and measuring its temperature. Studying the cosmic web gives us information on how galaxies built up over time."

The COS team hopes to observe 100 additional quasars and build up a survey of more than 10,000 hydrogen filaments in the cosmic web, many laced with heavy elements from early stars.

The Hubble Space Telescope is a project of international cooperation between NASA and the European Space Agency (ESA) and is managed by NASA's Goddard Space Flight Center (GSFC) in Greenbelt, Md. The Space Telescope Science Institute (STScI) conducts Hubble Science operations. The institute is operated for NASA by the Association of Universities for Research in Astronomy, Inc., Washington, D.C..