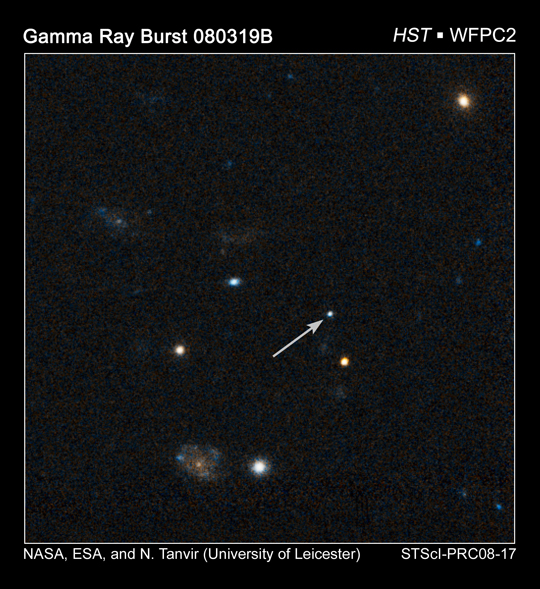 Peering across 7.5 billion light-years and halfway back to the Big Bang, NASA's Hubble Space Telescope has photographed the fading optical counterpart of a powerful gamma ray burst that holds the record for being the intrinsically brightest naked-eye object ever seen from Earth. For nearly a minute this single star was as bright as 10 million galaxies.

Hubble Wide Field and Planetary Camera 2 (WFPC2) images taken on Monday, April 7 show the fading optical counterpart of the titanic blast. The object erupted in a brilliant flash of gamma rays and other electromagnetic radiation at 2:12 a.m. EDT on March 19, and was detected by Swift, NASA's gamma ray burst watchdog satellite.

Immediately after the explosion, the gamma ray burst glowed as a dim 5th magnitude "star" in the spring constellation Bootes. Designated GRB 080319B, the intergalactic firework has been fading away ever since then.

Hubble astronomers had hoped to see the host galaxy where the burst presumably originated, but were taken aback that the light from the GRB is still drowning out the galaxy's light even three weeks after the explosion. This is particularly surprising because it was such a bright GRB initially.

Previously, bright bursts have tended to fade more rapidly, which fits in to the theory that brighter GRBs emit their energy in a more tightly confined beam. The slow fading leaves astronomers puzzling about just where the energy came from to power this GRB, and makes Hubble's next observations of this object in May all the more crucial.

Called a long-duration gamma ray burst, such events are theorized to be caused by the death of a very massive star, perhaps weighing as much as 50 times our Sun. Such explosions, sometimes dubbed "hypernovae," are more powerful than ordinary supernova explosions and are far more luminous, in part because their energy seems to be concentrated into a blowtorch-like beam that, in this case, was aimed directly at Earth.

The Hubble exposure also shows field galaxies around the fading optical component of the gamma ray burst, which are probably unrelated to the burst itself.

View more information and images on the discovery at the following Web site: