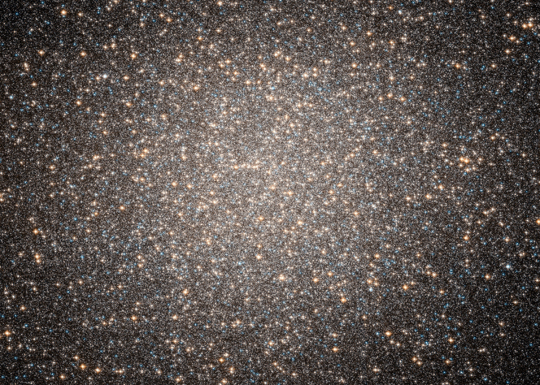 A well-known star cluster that glitters with the light of millions of stars may have a mysterious dark object tugging at its core. Astronomers have found evidence for a medium- size black hole at the core of Omega Centauri, one of the largest and most massive globular star clusters orbiting our Milky Way Galaxy.

The intermediate-mass black hole is estimated to be roughly 40,000 times the mass of the Sun. The black hole was discovered with NASA's Hubble Space Telescope and Gemini Observatory on Cerro Pachon in Chile. The ancient cluster is located 17,000 light-years from Earth.

"This result shows that there is a continuous range of masses for black holes, from supermassive, to intermediate, to small, stellar types," explained astronomer Eva Noyola of the Max-Planck Institute for Extraterrestrial Physics in Garching, Germany, and leader of the team that made the discovery. "This finding also is important because the theory of formation for supermassive black holes requires seed black holes that are exactly in the mass range of the one we found. Such seeds have not been identified so far. If these types of intermediate-mass black holes happen to be common in star clusters, then they can provide numerous seeds for the formation of the supermassive black holes."

Astronomers have debated the existence of moderately sized black holes because they have not found strong evidence for them, and there is no widely accepted mechanism for how they could form. They have ample evidence that small black holes of a few solar masses are produced when giant stars die. There is similar evidence that supermassive black holes weighing the equivalent of millions to billions of solar masses sit at the heart of many galaxies, including our Milky Way.

"Before this observation, we had only one example of an intermediate-mass black hole in the globular cluster G1, in the nearby Andromeda Galaxy," said astronomer Karl Gebhardt of the University of Texas at Austin and a member of the team that made the discovery.

Noyola and Gebhardt used Hubble and Gemini to gather evidence for the black hole. Hubble's Advanced Camera for Surveys showed how the stars are bunching up near the center of Omega Centauri, as seen in the gradual increase in starlight near the center.

Measuring the speed of the stars swirling near the cluster's center with the Gemini Observatory, the astronomers found that the stars closer to the core are moving faster than the stars farther away. The measurement implies that some unseen matter at the core is tugging on stars near it.

By comparing these results with standard models, the astronomers determined that the most likely cause of this accelerating stellar traffic jam is the gravitational pull of a massive, dense object, the astronomers explained. They also used models to calculate the black hole's mass.

Although the presence of an intermediate-mass black hole is the most likely reason for the stellar speedway near the cluster's center, the astronomers said they have considered a couple of other possible causes.

In the first scenario, the traffic jam of stars near the center is due to a collection of burned- out stars such as white dwarfs or neutron stars. Another possibility is that stars in the center of Omega Centauri have elongated orbits that would make the stars closest to the center appear to speed up.

"For both alternative scenarios it is very hard to get stars to behave that way, either the burned-out stars really bunched up in the center or many stars with very elongated orbits," Noyola explained. "The normal evolution of a star cluster like Omega Centauri should not end up with stars behaving in those ways. But even if we assume that either scenario did happen somehow, both configurations are expected to be very short lived. A clump of burned-out stars, for example, are expected to move farther away from the center quickly. The stars with elongated orbits are expected to become circular very quickly."

Many astronomers regard Omega Centauri as an unusual globular cluster because of its enormous size and mass. In fact, the 12 billion year old cluster has long been suspected of being the stripped-down core of a dwarf galaxy that had been shredded of most of its stars long ago. A previous Hubble survey of supermassive black holes and their host galaxies showed a correlation between the mass of a black hole and that of its host. Astronomers estimated that the mass of the suspected Omega Centauri dwarf galaxy was roughly 10 million solar masses. If lower-mass galaxies obey the same rule, then the mass of Omega Centauri does match that of its black hole.

Noyola and Gebhardt will use the European Southern Observatory's Very Large Telescope in Paranal, Chile to conduct follow-up observations of the velocity of the stars near the cluster's center to confirm the discovery.

The finding will appear in the April 10 issue of The Astrophysical Journal.

View more information on the discovery at the following Web sites: