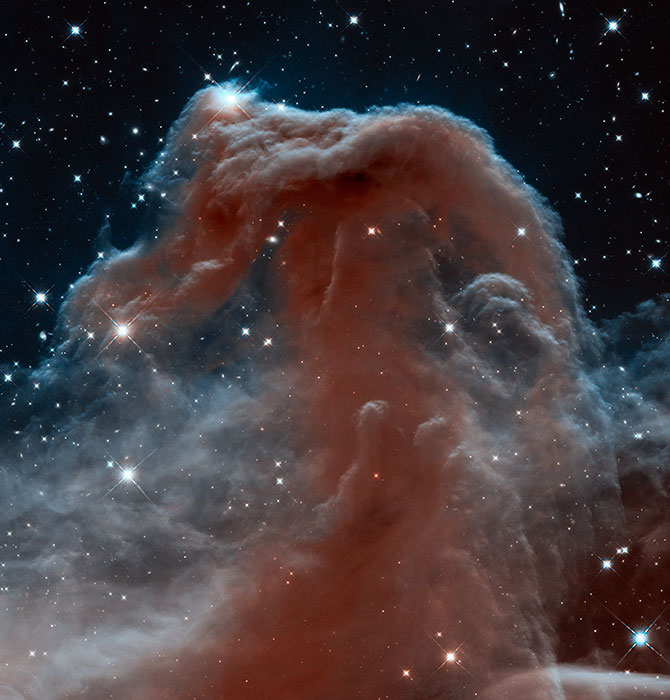 Credit:NASA, ESA, and the Hubble Heritage Team (STScI/AURA)
› Larger image
Astronomers have used NASA's Hubble Space Telescope to photograph the iconic Horsehead Nebula in a new, infrared light to mark the 23rd anniversary of the famous observatory's launch aboard the space shuttle Discovery on April 24, 1990.

Looking like an apparition rising from whitecaps of interstellar foam, the iconic Horsehead Nebula has graced astronomy books ever since its discovery more than a century ago. The nebula is a favorite target for amateur and professional astronomers. It is shadowy in optical light. It appears transparent and ethereal when seen at infrared wavelengths. The rich tapestry of the Horsehead Nebula pops out against the backdrop of Milky Way stars and distant galaxies that easily are visible in infrared light.

Hubble has been producing ground-breaking science for two decades. During that time, it has benefited from a slew of upgrades from space shuttle missions, including the 2009 addition of a new imaging workhorse, the high-resolution Wide Field Camera 3 that took the new portrait of the Horsehead.

The nebula is part of the Orion Molecular Cloud, located about 1,500 light-years away in the constellation Orion. The cloud also contains other well-known objects such as the Great Orion Nebula (M42), the Flame Nebula, and Barnard's Loop. It is one of the nearest and most easily photographed regions in which massive stars are being formed.

In the Hubble image, the backlit wisps along the Horsehead's upper ridge are being illuminated by Sigma Orionis, a young five-star system just out of view. Along the nebula's top ridge, two fledgling stars peek out from their now-exposed nurseries.

Scientists know a harsh ultraviolet glare from one of these bright stars is slowly evaporating the nebula. Gas clouds surrounding the Horsehead already have dissipated, but the tip of the jutting pillar contains a slightly higher density of hydrogen and helium, laced with dust. This casts a shadow that protects material behind it from being stripped away by intense stellar radiation evaporating the hydrogen cloud, and a pillar structure forms.

The Hubble Space Telescope is a project of international cooperation between NASA and the European Space Agency. NASA's Goddard Space Flight Center in Greenbelt, Md., manages the telescope. The Space Telescope Science Institute (STScI) in Baltimore, Md., conducts Hubble science operations. STScI is operated by the Association of Universities for Research in Astronomy Inc., in Washington.

For images and more information about the Horsehead Nebula, visit: