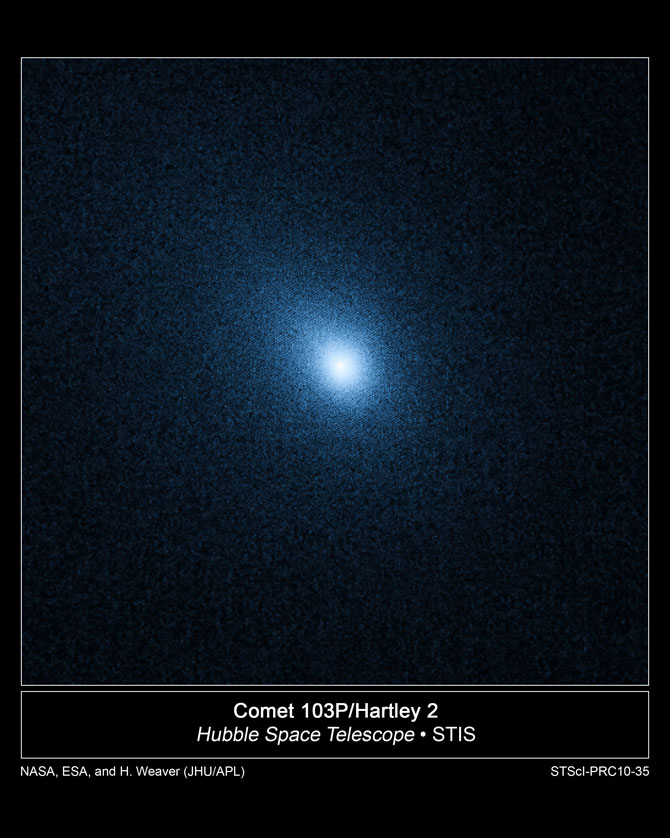 Hubble Space Telescope observations of comet 103P/Hartley 2, taken on September 25, are helping in the planning for a November 4 flyby of the comet by NASA's Deep Impact eXtended Investigation (DIXI) on NASA's Deep Impact Spacecraft performing the EPOXI mission."

Analysis of the new Hubble data shows that the nucleus has a diameter of approximately 0.93 miles (1.5 km), which is consistent with previous estimates.

The comet is in a highly active state, as it approaches the Sun. The Hubble data show that the coma is remarkably uniform, with no evidence for the types of outgassing jets seen from most "Jupiter Family" comets, of which Hartley 2 is a member.

Jets can be produced when the dust emanates from a few specific icy regions, while most of the surface is covered with relatively inert, meteoritic-like material. In stark contrast, the activity from Hartley 2's nucleus appears to be more uniformly distributed over its entire surface, perhaps indicating a relatively "young" surface that hasn't yet been crusted over.

Hubble's spectrographs - the Cosmic Origins Spectrograph (COS) and the Space Telescope Imaging Spectrograph (STIS) -- are expected to provide unique information about the comet's chemical composition that might not be obtainable any other way, including measurements by DIXI. The Hubble team is specifically searching for emissions from carbon monoxide (CO) and diatomic sulfur (S2). These molecules have been seen in other comets but have not yet been detected in 103P/Hartley 2.

103P/Hartley has an orbital period of 6.46 years. It was discovered by Malcolm Hartley in 1986 at the Schmidt Telescope Unit in Siding Spring, Australia. The comet will pass within 11 million miles of Earth (about 45 times the distance to the Moon) on October 20. During that time the comet may be visible to the naked eye as a 5th magnitude "fuzzy star" in the constellation Auriga.