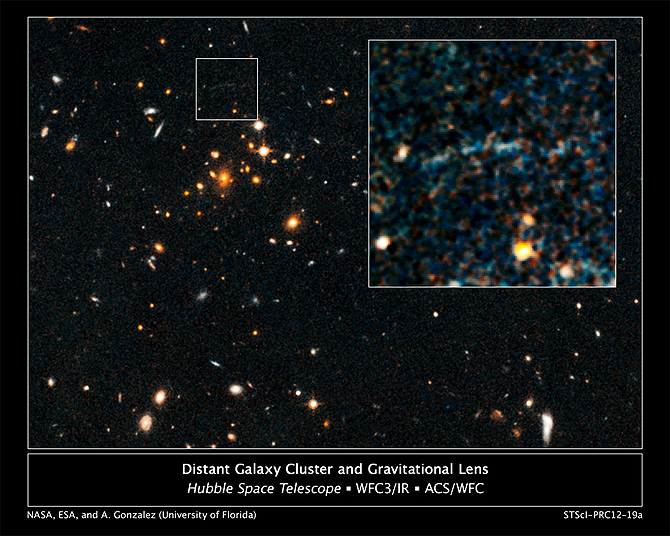 Seeing is believing, except when you don't believe what you see.

Astronomers using NASA's Hubble Space Telescope have found a puzzling arc of light behind an extremely massive cluster of galaxies residing 10 billion light-years away. The galactic grouping, discovered by NASA's Spitzer Space Telescope, was observed when the universe was roughly a quarter of its current age of 13.7 billion years. The giant arc is the stretched shape of a more distant galaxy whose light is distorted by the monster cluster's powerful gravity, an effect called gravitational lensing.

The trouble is, the arc shouldn't exist.

"When I first saw it, I kept staring at it, thinking it would go away," said study leader Anthony Gonzalez of the University of Florida in Gainesville. "According to a statistical analysis, arcs should be extremely rare at that distance. At that early epoch, the expectation is that there are not enough galaxies behind the cluster bright enough to be seen, even if they were 'lensed' or distorted by the cluster. The other problem is that galaxy clusters become less massive the farther back in time you go. So it's more difficult to find a cluster with enough mass to be a good lens for gravitationally bending the light from a distant galaxy."

Galaxy clusters are collections of hundreds to thousands of galaxies bound together by gravity. They are the most massive structures in our universe. Astronomers frequently study galaxy clusters to look for faraway, magnified galaxies behind them that would otherwise be too dim to see with telescopes. Many such gravitationally lensed galaxies have been found behind galaxy clusters closer to Earth.

The surprise in this Hubble observation is spotting a galaxy lensed by an extremely distant cluster. Dubbed IDCS J1426.5+3508, the cluster is the most massive found at that epoch, weighing as much as 500 trillion suns. It is 5 to 10 times larger than other clusters found at such an early time in the universe's history. The team spotted the cluster in a search using NASA's Spitzer Space Telescope in combination with archival optical images taken as part of the National Optical Astronomy Observatory's Deep Wide Field Survey at the Kitt Peak National Observatory, Tucson, Ariz. The combined images allowed them to see the cluster as a grouping of very red galaxies, indicating they are far away.

This unique system constitutes the most distant cluster known to "host" a giant gravitationally lensed arc. Finding this ancient gravitational arc may yield insight into how, during the first moments after the big bang, conditions were set up for the growth of hefty clusters in the early universe.

The arc was spotted in optical images of the cluster taken in 2010 by Hubble's Advanced Camera for Surveys. The infrared capabilities of Hubble's Wide Field Camera 3 (WFC3) helped provide a precise distance, confirming it to be one of the farthest clusters yet discovered.

Once the astronomers determined the cluster's distance, they used Hubble, the Combined Array for Research in Millimeter-wave Astronomy (CARMA) radio telescope, and NASA's Chandra X-ray Observatory to independently show that the galactic grouping is extremely massive.

"The chance of finding such a gigantic cluster so early in the universe was less than one percent in the small area we surveyed," said team member Mark Brodwin of the University of Missouri-Kansas City. "It shares an evolutionary path with some of the most massive clusters we see today, including the Coma Cluster and the recently discovered El Gordo Cluster."

An analysis of the arc revealed that the lensed object is a star-forming galaxy that existed 10 billion to 13 billion years ago. The team hopes to use Hubble again to obtain a more accurate distance to the lensed galaxy.

Gonzalez has considered several possible explanations for the arc.

One explanation is that distant galaxy clusters, unlike nearby clusters, have denser concentrations of galaxies at their cores, making them better magnifying glasses. However, even if the distant cores were denser, the added bulk still should not provide enough gravitational muscle to produce the giant arc seen in Gonzalez's observations, according to a statistical analysis.

Another possibility is that the initial microscopic fluctuations in matter made right after the big bang were different from those predicted by standard cosmological simulations, and therefore produced more massive clusters than expected.

"I'm not yet convinced by any of these explanations," Gonzalez said. "After all, we have found only one example. We really need to study more extremely massive galaxy clusters that existed between 8 billion and 10 billion years ago to see how many more gravitationally lensed objects we can find."

The team's results are described in three papers, which will appear in the July 10, 2012 issue of The Astrophysical Journal. Gonzalez is the first author on one of the papers; Brodwin, on another; and Adam Stanford of the University of California at Davis, on the third.

For images and more information about Hubble and this study, visit: