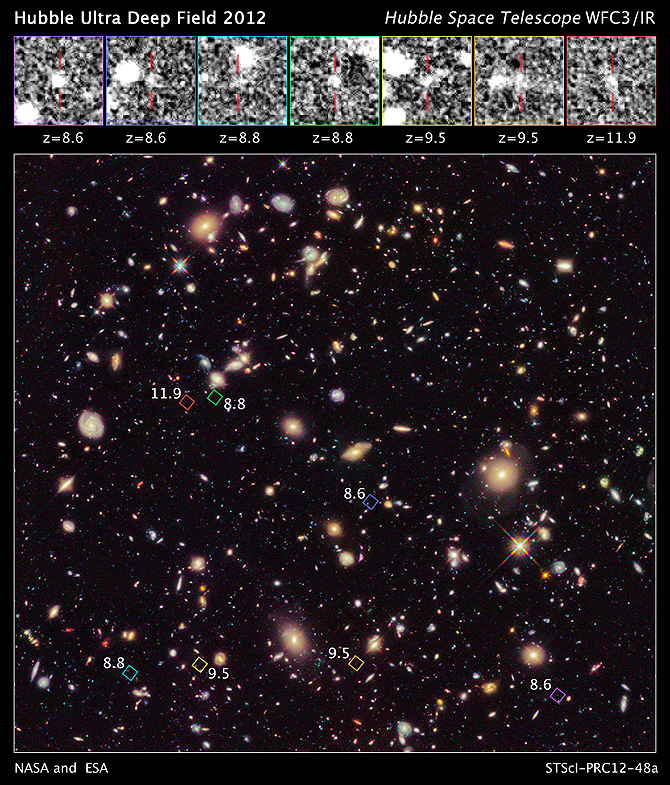 › View larger
This new image of the Hubble Ultra Deep Field (HUDF) 2012 campaign reveals a previously unseen population of seven faraway galaxies, which are observed as they appeared in a period 350 million to 600 million years after the big bang. Credit: NASA, ESA, R. Ellis (Caltech), and the UDF 2012 Team
WASHINGTON -- Using NASA's Hubble Space Telescope, astronomers have uncovered a previously unseen population of seven primitive galaxies that formed more than 13 billion years ago, when the universe was less than 4 percent of its present age. The deepest images to date from Hubble yield the first statistically robust sample of galaxies that tells how abundant they were close to the era when galaxies first formed.

The results are from an ambitious Hubble survey of an intensively studied patch of sky known as the Ultra Deep Field (UDF). In the 2012 campaign, called UDF12, a team of astronomers led by Richard Ellis of the California Institute of Technology in Pasadena used Hubble's Wide Field Camera 3 (WFC 3) to peer deeper into space in near-infrared light than any previous Hubble observation.

The observations were made during six weeks in August and September, and the first scientific results now are appearing in a series of scientific papers. The UDF12 team is releasing these unique data to the public after preparing them for other research groups to use.

Looking deeper into the universe also means peering further back in time. The universe is estimated to be 13.7 billion years old. The newly discovered galaxies are seen as they looked 350 to 600 million years after the big bang. Their light is just arriving at Earth now.

Astronomers study the distant universe in near-infrared light because the expansion of space stretches ultraviolet and visible light from galaxies into infrared wavelengths, a phenomenon called "redshift." The more distant a galaxy, the higher its redshift.

The greater depth of the new Hubble images, together with a carefully designed survey strategy, allows this work to go further than previous studies, thereby providing what researchers say is the first reliable census of this epoch. Notably, one of the galaxies may be a distance record breaker, observed 380 million years after the birth of our universe in the big bang, corresponding to a redshift of 11.9.

A major goal of the new program was to determine how rapidly the number of galaxies increases over time in the early universe. This measure is the key evidence for how quickly galaxies build up their constituent stars.

The team estimated the galaxy distances by studying their colors through a carefully chosen set of four filters at specific near-infrared wavelengths. "We added one filter, and undertook much deeper exposures in some filters than in earlier work, in order to convincingly reject the possibility that some of our galaxies might be foreground objects," said team member James Dunlop of the Institute for Astronomy at the University of Edinburgh in Scotland.

Astronomers have long debated whether hot stars in such early galaxies could have provided enough radiation to warm the cold hydrogen that formed soon after the big bang. This process, called "re-ionization," is thought to have occurred 200 million to 1 billion years after the birth of the universe. This process made the universe transparent to light, allowing astronomers to look far back into time. The galaxies in the new study are seen in this early epoch.

"Our data confirm re-ionization was a gradual process, occurring over several hundred million years, with galaxies slowly building up their stars and chemical elements," said Brant Robertson of the University of Arizona in Tucson. "There wasn’t a single dramatic moment when galaxies formed. It was a gradual process."

The team's finding on the distant galaxy census has been accepted for publication in The Astrophysical Journal Letters.

For images and more information about these results, visit: