Grow Text SizeShrink Text Size
Hubble Breaks New Ground with Discovery of Distant Exploding Star
WASHINGTON -- NASA's Hubble Space Telescope has looked deep into the distant universe and detected the feeble glow of a star that exploded more than 9 billion years ago. The sighting is the first finding of an ambitious survey that will help astronomers place better constraints on the nature of dark energy, the mysterious repulsive force that is causing the universe to fly apart ever faster. 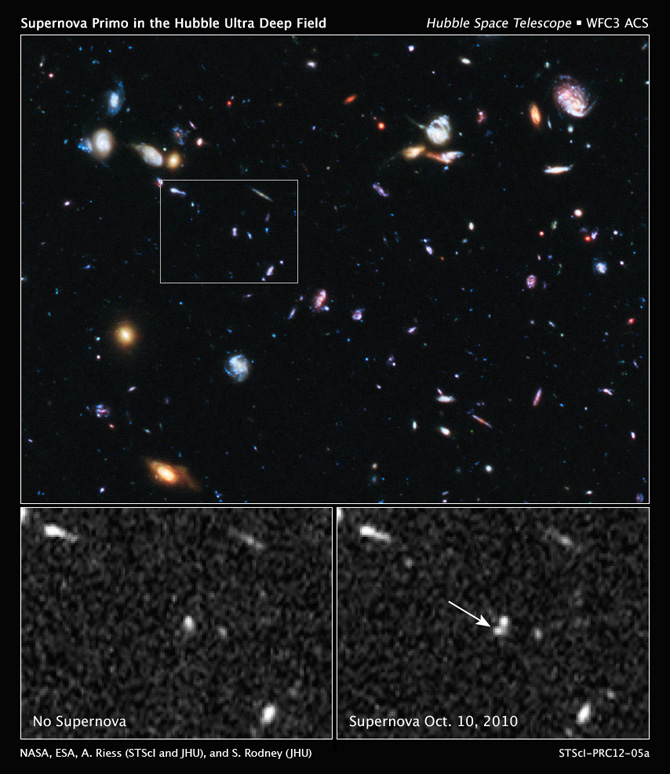 These three images taken by NASA's Hubble Space Telescope reveal the emergence of an exploding star, called a supernova. Nicknamed SN Primo, the exploding star belongs to a special class called Type Ia supernovae, which are distance markers used for studying dark energy and the expansion rate of the universe. The top image shows part of the Hubble Ultra Deep Field, the region where astronomers were looking for a supernova blast. The white box shows where the supernova is later seen. The bottom left image is a close-up of the field without the supernova. A new bright object, identified as the supernova, appears in the image at bottom right. Credit: NASA, ESA, A. Riess (Space Telescope Science Institute and The Johns Hopkins University), and S. Rodney (The Johns Hopkins University)
› Larger image

"For decades, astronomers have harnessed the power of Hubble to unravel the mysteries of the universe," said John Grunsfeld, associate administrator for NASA’s Science Mission Directorate in Washington. "This new observation builds upon the revolutionary research using Hubble that won astronomers the 2011 Nobel Prize in Physics, while bringing us a step closer to understanding the nature of dark energy which drives the cosmic acceleration." As an astronaut, Grunsfeld visited Hubble three times, performing a total of eight spacewalks to service and upgrade the observatory.

The stellar explosion, nicknamed SN Primo, belongs to a special class called Type Ia supernovae, which are bright beacons used as distance markers for studying the expansion rate of the universe. Type Ia supernovae likely arise when white dwarf stars, the burned-out cores of normal stars, siphon too much material from their companion stars and explode.

SN Primo is the farthest Type Ia supernova with its distance confirmed through spectroscopic observations. In these types of observations, a spectrum splits the light from a supernova into its constituent colors. By analyzing those colors, astronomers can confirm its distance by measuring how much the supernova's light has been stretched, or red-shifted, into near-infrared wavelengths because of the expansion of the universe.

The supernova was discovered as part of a three-year Hubble program to survey faraway Type Ia supernovae, opening a new distance realm for searching for this special class of stellar explosion. The remote supernovae will help astronomers determine whether the exploding stars remain dependable cosmic yardsticks across vast distances of space in an epoch when the cosmos was only one-third its current age of 13.7 billion years.

Called the CANDELS+CLASH Supernova Project, the census uses the sharpness and versatility of Hubble's Wide Field Camera 3 (WFC3) to assist astronomers in the search for supernovae in near-infrared light and verify their distance with spectroscopy. CANDELS is the Cosmic Assembly Near-infrared Deep Extragalactic Legacy Survey and CLASH is the Cluster Lensing and Supernova Survey.

"In our search for supernovae, we had gone as far as we could go in optical light," said Adam Riess, the project's lead investigator, at the Space Telescope Science Institute and The Johns Hopkins University in Baltimore, Md. "But it's only the beginning of what we can do in infrared light. This discovery demonstrates that we can use the Wide Field Camera 3 to search for supernovae in the distant universe."

The new results were presented on Jan. 11 at the American Astronomical Society meeting in Austin, Texas.

The supernova team's search technique involved taking multiple near-infrared images over several months, looking for a supernova's faint glow. After the team spotted the stellar blast in October 2010, they used WFC3's spectrometer to verify SN Primo's distance and to decode its light, finding the unique signature of a Type Ia supernova. The team then re-imaged SN Primo periodically for eight months, measuring the slow dimming of its light.

By taking the census, the astronomers hope to determine the frequency of Type Ia supernovae during the early universe and glean insights into the mechanisms that detonated them.

"If we look into the early universe and measure a drop in the number of supernovae, then it could be that it takes a long time to make a Type Ia supernova," said team member Steve Rodney of The Johns Hopkins University. "Like corn kernels in a pan waiting for the oil to heat up, the stars haven't had enough time at that epoch to evolve to the point of explosion. However, if supernovae form very quickly, like microwave popcorn, then they will be immediately visible, and we'll find many of them, even when the universe was very young. Each supernova is unique, so it's possible that there are multiple ways to make a supernova."

If astronomers discover that Type Ia supernovae begin to depart from how they expect them to look, they might be able to gauge those changes and make the measurements of dark energy more precise. Riess and two other astronomers shared the 2011 Nobel Prize in Physics for discovering dark energy 13 years ago, using Type Ia supernova to plot the universe's expansion rate.