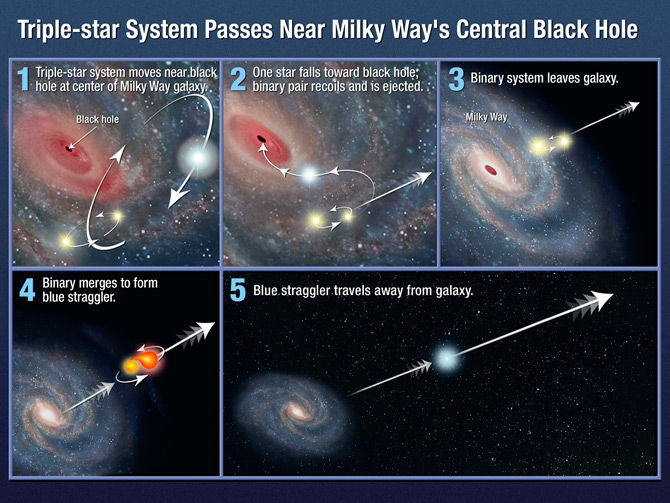 > Larger image
This illustration shows one possible mechanism for how the star HE 0437-5439 acquired enough energy to be ejected from our Milky Way galaxy. In this scenario, a triple-star system, consisting of a close binary system and another outer member bound to the group, is orbiting near the galaxy's monster black hole. One star is captured by the black hole and the tightly bound pair gets ejected from the galaxy. As the duo speeds through the galaxy, one member evolves more quickly and consumes the other. The resulting rejuvenated star, massive and very blue, is called a blue straggler.
Credit: NASA, ESA, and A. Feild (STScI)


A hundred million years ago, a triple-star system was traveling through the bustling center of our Milky Way galaxy when it made a life-changing misstep. The trio wandered too close to the galaxy's giant black hole, which captured one of the stars and hurled the other two out of the Milky Way. Adding to the stellar game of musical chairs, the two outbound stars merged to form a super- hot, blue star.

This story may seem like science fiction, but astronomers using NASA's Hubble Space Telescope say it is the most likely scenario for a so-called hypervelocity star, known as HE 0437-5439, one of the fastest ever detected. It is blazing across space at a speed of 1.6 million miles (2.5 million kilometers) an hour, three times faster than our Sun's orbital velocity in the Milky Way. Hubble observations confirm that the stellar speedster hails from the Milky Way's core, settling some confusion over where it originally called home. 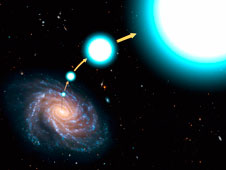 > Larger image
The hot, blue star HE 0437-5439 has been tossed out of the center of our Milky Way galaxy with enough speed to escape the galaxy's gravitational clutches. The stellar outcast is rocketing through the Milky Way's distant outskirts at 1.6 million miles an hour, high above the galaxy's disk, about 200,000 light-years from the center. The star is destined to roam intergalactic space.
Credit: NASA, ESA, and G. Bacon (STScI) 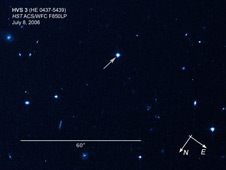 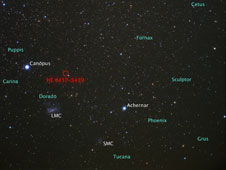 > Larger image
Location of Hypervelocity Star HE 0437-5439
Credit: NASA, ESA, and Z. Levay (STScI) Most of the roughly 16 known hypervelocity stars, all discovered since 2005, are thought to be exiles from the heart of our galaxy. But this Hubble result is the first direct observation linking a high-flying star to a galactic center origin.

"Using Hubble, we can for the first time trace back to where the star comes from by measuring the star's direction of motion on the sky. Its motion points directly from the Milky Way center," says astronomer Warren Brown of the Harvard- Smithsonian Center for Astrophysics in Cambridge, Mass., a member of the Hubble team that observed the star. "These exiled stars are rare in the Milky Way's population of 100 billion stars. For every 100 million stars in the galaxy lurks one hypervelocity star."

The movements of these unbound stars could reveal the shape of the dark matter distribution surrounding our galaxy. "Studying these stars could provide more clues about the nature of some of the universe's unseen mass, and it could help astronomers better understand how galaxies form," says team leader Oleg Gnedin of the University of Michigan in Ann Arbor. "Dark matter's gravitational pull is measured by the shape of the hyperfast stars' trajectories out of the Milky Way."

The stellar outcast is already cruising in the Milky Way's distant outskirts, high above the galaxy's disk, about 200,000 light-years from the center. By comparison, the diameter of the Milky Way's disk is approximately 100,000 light- years. Using Hubble to measure the runaway star's direction of motion and determine the Milky Way's core as its starting point, Brown and Gnedin's team calculated how fast the star had to have been ejected to reach its current location.

"The star is traveling at an absurd velocity, twice as much as the star needs to escape the galaxy's gravitational field," explains Brown, a hypervelocity star hunter who found the first unbound star in 2005. "There is no star that travels that quickly under normal circumstances-something exotic has to happen."

There's another twist to this story. Based on the speed and position of HE 0437- 5439, the star would have to be 100 million years old to have journeyed from the Milky Way's core. Yet its mass - nine times that of our Sun - and blue color mean that it should have burned out after only 20 million years - far shorter than the transit time it took to get to its current location.

The most likely explanation for the star's blue color and extreme speed is that it was part of a triple-star system that was involved in a gravitational billiard-ball game with the galaxy's monster black hole. This concept for imparting an escape velocity on stars was first proposed in 1988. The theory predicted that the Milky Way's black hole should eject a star about once every 100,000 years.

Brown suggests that the triple-star system contained a pair of closely orbiting stars and a third outer member also gravitationally tied to the group. The black hole pulled the outer star away from the tight binary system. The doomed star's momentum was transferred to the stellar twosome, boosting the duo to escape velocity from the galaxy. As the pair rocketed away, they went on with normal stellar evolution. The more massive companion evolved more quickly, puffing up to become a red giant. It enveloped its partner, and the two stars spiraled together, merging into one superstar - a blue straggler.

"While the blue straggler story may seem odd, you do see them in the Milky Way, and most stars are in multiple systems," Brown says.

This vagabond star has puzzled astronomers since its discovery in 2005 by the Hamburg/European Southern Observatory sky survey. Astronomers had proposed two possibilities to solve the age problem. The star either dipped into the Fountain of Youth by becoming a blue straggler, or it was flung out of the Large Magellanic Cloud, a neighboring galaxy.

In 2008 a team of astronomers thought they had solved the mystery. They found a match between the exiled star's chemical makeup and the characteristics of stars in the Large Magellanic Cloud. The rogue star's position also is close to the neighboring galaxy, only 65,000 light-years away. The new Hubble result settles the debate over the star's birthplace.

Astronomers used the sharp vision of Hubble's Advanced Camera for Surveys to make two separate observations of the wayward star 3 1/2 years apart. Team member Jay Anderson of the Space Telescope Science Institute in Baltimore, Md., developed a technique to measure the star's position relative to each of 11 distant background galaxies, which form a reference frame.

Anderson then compared the star's position in images taken in 2006 with those taken in 2009 to calculate how far the star moved against the background galaxies. The star appeared to move, but only by 0.04 of a pixel (picture element) against the sky background. "Hubble excels with this type of measurement," Anderson says. "This observation would be challenging to do from the ground."

"We are targeting massive 'B' stars, like HE 0437-5439," says Brown, who has discovered 14 of the 16 known hypervelocity stars. "These stars shouldn't live long enough to reach the distant outskirts of the Milky Way, so we shouldn't expect to find them there. The density of stars in the outer region is much less than in the core, so we have a better chance to find these unusual objects."

The results were published online in The Astrophysical Journal Letters on July 20, 2010. Brown is the paper's lead author.