Dark Matter Core Defies Explanation
Astronomers using data from NASA's Hubble Telescope have observed what appears to be a clump of dark matter left behind from a wreck between massive clusters of galaxies. The result could challenge current theories about dark matter that predict galaxies should be anchored to the invisible substance even during the shock of a collision.

Abell 520 is a gigantic merger of galaxy clusters located 2.4 billion light-years away. Dark matter is not visible, although its presence and distribution is found indirectly through its effects. Dark matter can act like a magnifying glass, bending and distorting light from galaxies and clusters behind it. Astronomers can use this effect, called gravitational lensing, to infer the presence of dark matter in massive galaxy clusters.

This technique revealed the dark matter in Abell 520 had collected into a "dark core," containing far fewer galaxies than would be expected if the dark matter and galaxies were anchored together. Most of the galaxies apparently have sailed far away from the collision. 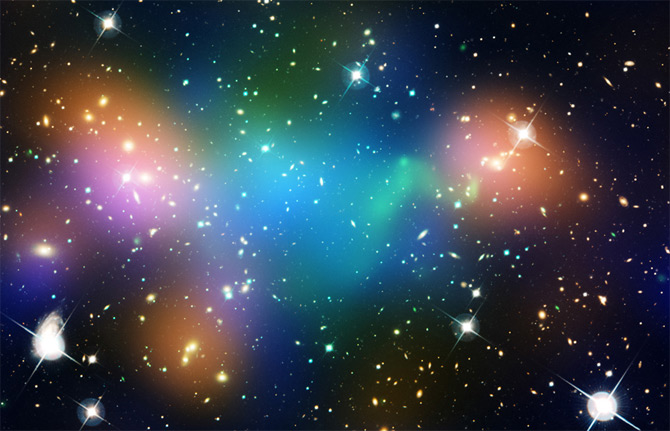 This composite image shows the distribution of dark matter, galaxies, and hot gas in the core of the merging galaxy cluster Abell 520, formed from a violent collision of massive galaxy clusters. The natural-color image of the galaxies was taken with NASA's Hubble Space Telescope and with the Canada-France-Hawaii Telescope in Hawaii. Superimposed on the image are "false-colored" maps showing the concentration of starlight, hot gas, and dark matter in the cluster.

Starlight from galaxies, derived from observations by the Canada-France-Hawaii Telescope, is colored orange. The green-tinted regions show hot gas, as detected by NASA's Chandra X-ray Observatory. The gas is evidence that a collision took place. The blue-colored areas pinpoint the location of most of the mass in the cluster, which is dominated by dark matter. Dark matter is an invisible substance that makes up most of the universe's mass. The dark-matter map was derived from the Hubble Wide Field Planetary Camera 2 observations, by detecting how light from distant objects is distorted by the cluster galaxies, an effect called gravitational lensing.

The blend of blue and green in the center of the image reveals that a clump of dark matter resides near most of the hot gas, where very few galaxies are found. This finding confirms previous observations of a dark-matter core in the cluster. The result could present a challenge to basic theories of dark matter, which predict that galaxies should be anchored to dark matter, even during the shock of a collision. Abell 520 resides 2.4 billion light-years away.

"This result is a puzzle," said astronomer James Jee of the University of California in Davis, lead author of paper about the results available online in The Astrophysical Journal. "Dark matter is not behaving as predicted, and it's not obviously clear what is going on. It is difficult to explain this Hubble observation with the current theories of galaxy formation and dark matter."

Initial detections of dark matter in the cluster, made in 2007, were so unusual that astronomers shrugged them off as unreal, because of poor data. New results from NASA's Hubble Space Telescope confirm that dark matter and galaxies separated in Abell 520.

One way to study the overall properties of dark matter is by analyzing collisions between galaxy clusters, the largest structures in the universe. When galaxy clusters crash, astronomers expect galaxies to tag along with the dark matter, like a dog on a leash. Clouds of hot, X-ray emitting intergalactic gas, however, plow into one another, slow down, and lag behind the impact.

That theory was supported by visible-light and X-ray observations of a colossal collision between two galaxy clusters called the Bullet Cluster. The galactic grouping has become an example of how dark matter should behave.

Studies of Abell 520 showed that dark matter's behavior may not be so simple. Using the original observations, astronomers found the system's core was rich in dark matter and hot gas, but contained no luminous galaxies, which normally would be seen in the same location as the dark matter. NASA's Chandra X-ray Observatory was used to detect the hot gas. Astronomers used the Canada-France-Hawaii Telescope and Subaru Telescope atop Mauna Kea to infer the location of dark matter by measuring the gravitationally lensed light from more distant background galaxies.

The astronomers then turned to the Hubble's Wide Field Planetary Camera 2, which can detect subtle distortions in the images of background galaxies and use this information to map dark matter. To astronomers' surprise, the Hubble observations helped confirm the 2007 findings.

"We know of maybe six examples of high-speed galaxy cluster collisions where the dark matter has been mapped," Jee said. "But the Bullet Cluster and Abell 520 are the two that show the clearest evidence of recent mergers, and they are inconsistent with each other. No single theory explains the different behavior of dark matter in those two collisions. We need more examples."

The team proposed numerous explanations for the findings, but each is unsettling for astronomers. In one scenario, which would have staggering implications, some dark matter may be what astronomers call "sticky." Like two snowballs smashing together, normal matter slams together during a collision and slows down. However, dark matter blobs are thought to pass through each other during an encounter without slowing down. This scenario proposes that some dark matter interacts with itself and stays behind during an encounter.

Another possible explanation for the discrepancy is that Abell 520 has resulted from a more complicated interaction than the Bullet Cluster encounter. Abell 520 may have formed from a collision between three galaxy clusters, instead of just two colliding systems in the case of the Bullet Cluster.

A third possibility is that the core contained many galaxies, but they were too dim to be seen, even by Hubble. Those galaxies would have to have formed dramatically fewer stars than other normal galaxies. Armed with the Hubble data, the group will try to create a computer simulation to reconstruct the collision and see if it yields some answers to dark matter's weird behavior.