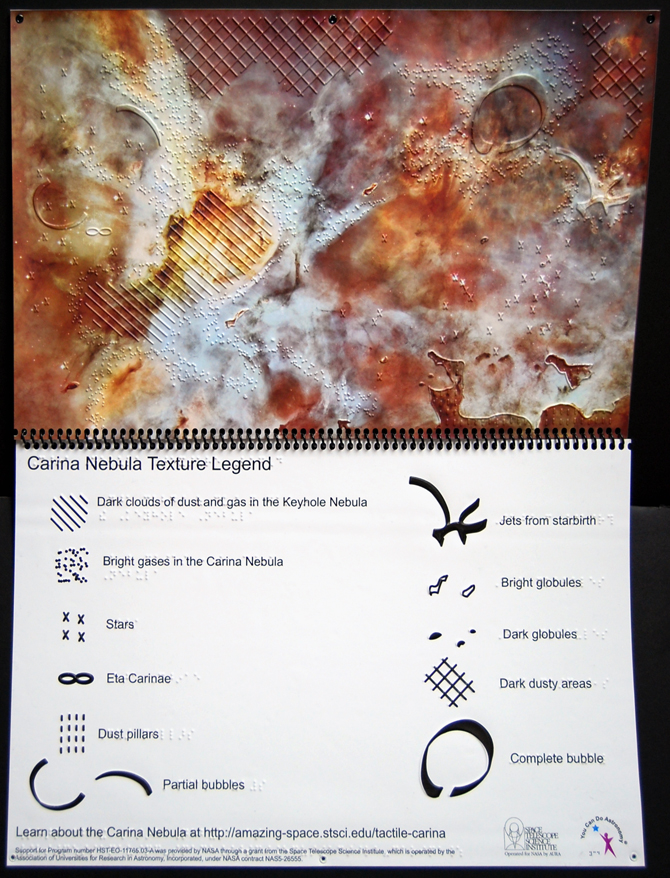 The raised arcs, lines, dots, and other markings in this 17-by-11-inch Hubble Space Telescope image of the Carina Nebula highlight important features in the giant gas cloud, allowing visually impaired people to feel what they cannot see and form a picture of the nebula in their minds. Credit: NASA, ESA, and M. Mutchler (STScI/AURA) and N. Grice (You Can Do Astronomy LLC)
› Larger image

The Hubble Space Telescope's dramatic glimpse of the Carina Nebula, a gigantic cloud of dust and gas bustling with star-making activity, is a glorious feast for the eyes. Energetic young stars are sculpting a fantasy landscape of bubbles, valleys, mountains, and pillars. Now this celestial fantasyland has been brought into view for people who cannot explore the image by sight.

Max Mutchler, a research and instrument scientist at the Space Telescope Science Institute in Baltimore, and Noreen Grice, president of You Can Do Astronomy LLC and author of several tactile astronomy books, have created a touchable image of the Carina Nebula that is engaging for everyone, regardless of their visual ability.

The 17-by-11-inch color image is embossed with lines, slashes, and other markings that correspond to objects in the giant cloud, allowing visually impaired people to feel what they cannot see and form a picture of the nebula in their minds. The image's design is also useful and intriguing for sighted people who have different learning styles.

"The Hubble image of the Carina Nebula is so beautiful, and it illustrates the entire life cycle of stars," says Mutchler, who, along with Grice, unveiled the tactile Carina image in January 2010, at the American Astronomical Society meeting in Washington, D.C. "I thought that people who are visually impaired should be able to explore it and learn from it, too."

Located 7,500 light-years from Earth, the nebula is a 3-million-year-old gigantic cloud where thousands of stars are cycling through the stages of stellar life and death. The nebula is 300 light-years wide, but Hubble captured a 50-light-year-wide view of its central region.

A Hubble education and public outreach grant allowed Mutchler to produce the special image. The grant is part of his Hubble archival research project to create complete mosaics of a huge collection of individual Carina Nebula images taken by Hubble (http://archive.stsci.edu/prepds/carina/). Mutchler made 300 copies of the tactile image and will distribute them to organizations that serve the visually impaired, including state schools and libraries for the blind and the National Federation of the Blind in Baltimore, Md.

When Mutchler decided to make a tactile Carina Nebula image last year, he immediately called his friend Grice, who is a pioneer in designing tactile astronomy images for the blind.

But Grice says the nebula image is so visually rich, it posed a challenge to design a textured image that conveys its beauty and complexity.

"When I first looked at the image, I didn't know what to focus on," she recalls. "In order to translate the image into a tactile image, I had to make certain that I understood the individual features that make up the image. There was so much to see."

She spent a couple of hours on the telephone with Mutchler, who gave her a guided tour of the nebula. Then she parsed astronomy books, looking for other views of the nebula. One feature, in particular, gave her some trouble. It was the Keyhole Nebula. Grice couldn't see how the shape in the image resembled a keyhole. Finally, she came across a 1950s image of Carina, and suddenly, she got it. The name referred to the shape of an old-fashioned "skeleton" key. Some visually impaired children who have touched the image say the feature actually resembles a foot, Grice says.

Choosing which features to show on the textured image also posed a challenge. Grice says she relied on a lesson she learned from her first NASA tactile astronomy book of Hubble images called "Touch the Universe": less is more.

"Convey just enough to get the idea," she says. "Then provide some Braille text that explains the science and describes the scene. A picture that is jammed with too many tactile details is very overwhelming for the mind's eye."

Grice used the Keyhole Nebula as the focal point and added other important features suggested by Mutchler to tell the story of stellar life and death, such as pillars of gas and dust that harbor infant stars, a cluster of young stars called Trumpler 14, and a massive, unstable star, Eta Carinae, that is near the end of its life.

The pair then developed a tactile code identifying the raised features and wrote a short guided tour that provides more information on the highlighted on the features. The guide and an audio tour of the nebula are on a special Web page called "The Tactile Carina Nebula" (http://amazing-space.stsci.edu/tactile-carina/), on Amazing Space, the Space Telescope Science Institute's education Web site.

A stable of seasoned tactile astronomy evaluators, including Vivian Hoette, the education outreach coordinator of the University of Chicago's Yerkes Observatory in Williams Bay, Wis., and Ben Wentworth, a retired teacher from the Colorado School for the Blind in Colorado Springs, Colo., helped test several prototypes of the image. One such evaluation place was the Youth Slam, held in the summer of 2009 in College Park, Md. The National Federation of the Blind coordinated the event to promote careers in math, engineering, and science.

One of the biggest surprises from their testing was the image size. Grice and Mutchler originally thought that a large (almost 6-foot-wide) or medium-sized (3-foot-wide) tactile image would be appropriate for students. The children who sampled the image, however, preferred the much smaller 11-by-17-inch image.

"Many students felt lost with the larger prototype versions because certain objects were separated by empty spaces," Grice says. "However, the smaller version allowed hands to easily track from one object to another."

Adds Hoette, one of the evaluators: "The smaller size gives them enough details so they can get the big picture, and then they can read the science behind it in Braille text, or they can listen to the audio tour on 'The Tactile Carina' Web page while they are touching the image."

The Grice-Mutchler partnership has worked so well that the duo hopes to produce more tactile Hubble images. "It would be great to build up a catalogue of these images for the visually impaired," Mutchler says.

The Hubble Space Telescope is a project of international cooperation between NASA and the European Space Agency. NASA's Goddard Space Flight Center manages the telescope. The Space Telescope Science Institute conducts Hubble science operations. The institute is operated for NASA by the Association of Universities for Research in Astronomy, Inc. in Washington, D.C.
› Back To Top