Barred Spiral Galaxies Are Latecomers to the Universe 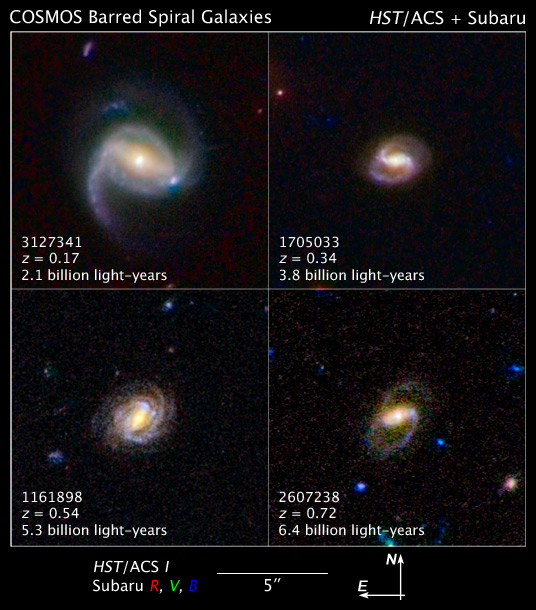 A frequent sign of the maturity of a spiral galaxy is the formation of a ribbon of stars and gas that slices across the nucleus, like the slash across a "no smoking" sign.

In a landmark study of more than 2,000 spiral galaxies from the largest galaxy census conducted by NASA's Hubble Space Telescope, astronomers found that so-called barred spiral galaxies were far less plentiful 7 billion years ago than they are today, in the local universe.

The study's results confirm the idea that bars are a sign of galaxies reaching full maturity as the "formative years" end. The observations are part of the Cosmic Evolution Survey (COSMOS).

This new detailed look at the history of bar formation, made with Hubble's Advanced Camera for Surveys, provides clues to understanding when and how spiral galaxies formed and evolved over time.

A team led by Kartik Sheth of the Spitzer Science Center at the California Institute of Technology in Pasadena discovered that only 20 percent of the spiral galaxies in the distant past possessed bars, compared with nearly 70 percent of their modern counterparts.

Bars have been forming steadily over the last 7 billion years, more than tripling in number. "The recently forming bars are not uniformly distributed across galaxy masses, however, and this is a key finding from our investigation," Sheth explained. "They are forming mostly in the small, low-mass galaxies, whereas among the most massive galaxies, the fraction of bars was the same in the past as it is today."

The findings, Sheth continued, have important ramifications for galaxy evolution. "We know that evolution is generally faster for more massive galaxies: They form their stars early and fast and then fade into red disks. Low-mass galaxies are known to form stars at a slower pace, but now we see that they also made their bars slowly over time," he said.

COSMOS covers an area of sky nine times larger than the full Moon, surveying 10 times more spiral galaxies than previous observations. In support of the Hubble galaxy images, the team derived distances to the galaxies in the COSMOS field using data from Hubble and an assortment of ground-based telescopes.

Bars form when stellar orbits in a spiral galaxy become unstable and deviate from a circular path. "The tiny elongations in the stars' orbits grow and they get locked into place, making a bar," explained team member Bruce Elmegreen of IBM's research Division in Yorktown Heights, N.Y. "The bar becomes even stronger as it locks more and more of these elongated orbits into place. Eventually a high fraction of the stars in the galaxy's inner region join the bar."

Added team member Lia Athanassoula of the Laboratoire d'Astrophysique de Marseille in France: "The new observations suggest that the instability is faster in more massive galaxies, perhaps because their inner disks are denser and their gravity is stronger."

Bars are perhaps one of the most important catalysts for changing a galaxy. They force a large amount of gas towards the galactic center, fueling new star formation, building central bulges of stars, and feeding massive black holes.

"The formation of a bar may be the final important act in the evolution of a spiral galaxy," Sheth said. "Galaxies are thought to build themselves up through mergers with other galaxies. After settling down, the only other dramatic way for galaxies to evolve is through the action of bars."

Our Milky Way Galaxy, another massive barred spiral, has a central bar that probably formed somewhat early, like the bars in other large galaxies in the Hubble survey. "Understanding how bars formed in the most distant galaxies will eventually shed light on how it occurred here, in our own backyard," Sheth said.