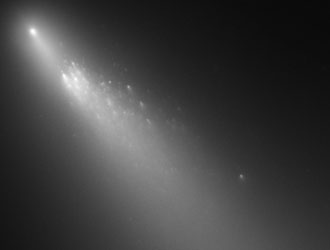 There will be no tsunamis, firestorms or mass extinctions to spoil your Memorial Day weekend.

Although the Internet is rife with speculation that a fragment of Comet 73P/Schwassmann-Wachmann 3 will strike the Earth on May 25, neither the main comet nor any of its more than 40 fragments pose a danger to Earth.

"We are very well acquainted with the trajectory of Comet 73P Schwassmann-Wachmann 3," said Donald Yeomans, manager of NASA's Near-Earth Object Program Office. "There is absolutely no danger to people on the ground or the inhabitants of the International Space Station, as the main body of the object and any pieces from the breakup will pass many millions of miles beyond the Earth."

However, you can see the comet falling apart right before our eyes, thanks to NASA's Hubble Space Telescope.

Recent Hubble images have uncovered many more fragments than have been reported by ground-based observers. These observations provide an unprecedented opportunity to study the demise of a comet nucleus.

None of the comet's fragments will come closer than 5.5 million miles to Earth during its closest approaches May 12 - 28. That's more than 20 times the distance from the Earth to the moon.

The main fragment, designated fragment C, will pass closest to Earth on May 12 at a distance of approximately 7.3 million miles. It will be visible to small telescopes during the morning hours in the constellation Vulpecula. NASA's Spitzer Space Telescope will observe the comet in May.

Astronomers have been observing the comet for more than 75 years. The trajectory of this comet has been monitored and refined over time, and its path around the sun is well understood. Amateur and professional astronomers around the world have been tracking its spectacular disintegration for years.

The comet is currently comprised of a chain of fragments, named alphabetically, stretching across several degrees on the sky. (The sun and moon each have an apparent diameter of about 1/2 of a degree.) Ground-based observers have noted dramatic brightening events associated with some of the fragments (as seen in the image below) indicating that they are continuing to break-up and that some may disappear altogether.

Hubble caught two of the fragments, B and G, shortly after large outbursts in activity. Hubble also photographed fragment C , which at the time was less active. The resulting images reveal that a hierarchical destruction process is taking place, in which fragments are continuing to break into smaller chunks. Several dozen "mini-fragments" are found trailing behind each main fragment, probably associated with the ejection of house-sized chunks of surface material that can only be detected in these very sensitive and high- resolution Hubble images.

Sequential Hubble images of the B fragment, taken a few days apart, suggest that the chunks are pushed down the tail by outgassing from the icy, sunward-facing surfaces of the chunks, much like space-walking astronauts are propelled by their jetpacks. The smaller chunks have the lowest mass, and so are accelerated away from the parent nucleus faster than the larger chunks. Some of the chunks seem to dissipate completely over the course of several days.

Deep-freeze relics of the early solar system, cometary nuclei are porous and fragile mixes of dust and ices. They can be broken apart by gravitational tidal forces when they pass near large bodies. For example, Comet Shoemaker-Levy 9 was torn to pieces when it skirted near Jupiter in 1992, prior to plunging into Jupiter's atmosphere two years later. They can also fly apart from rapid rotation of the nucleus, break apart because of thermal stresses as they pass near the Sun, or explosively pop apart like corks from champagne bottles due to the outburst of trapped volatile gases.

"Catastrophic breakups may be the ultimate fate of most comets," says planetary astronomer Hal Weaver of the Johns Hopkins University Applied Physics Laboratory, who led the team that made the recent Hubble observations and who used Hubble previously to study the fragmentations of comets Shoemaker-Levy 9 in 1993-1994, Hyakutake in 1996, and 1999 S4 (LINEAR) in 2000. Analysis of the new Hubble data, and data taken by other observatories as the comet approaches the Earth and Sun, may reveal which of these breakup mechanisms are contributing to the disintegration of 73P/Schwassmann-Wachmann 3.

German astronomers Arnold Schwassmann and Arno Arthur Wachmann discovered this comet during a photographic search for asteroids in 1930, when the comet passed within 5.8 million miles of the Earth (only 24 times the Earth-Moon distance). The comet orbits the Sun every 5.4 years, but it was not seen again until 1979. The comet was missed again in 1985 but has been observed every return since then.

During the fall of 1995, the comet had a huge outburst in activity and shortly afterwards four separate nuclei were identified and labeled "A", "B", "C", and "D", with "C" being the largest and the presumed principal remnant of the original nucleus. Only the C and B fragments were definitively observed during the next return, possibly because of the poor geometry for the 2000-2001 apparition. The much better observing circumstances during this year's return may be partly responsible for the detection of so many new fragments, but it is also likely that the disintegration of the comet is now accelerating. Whether any of the many fragments will survive the trip around the Sun remains to be seen.
›Back To Top