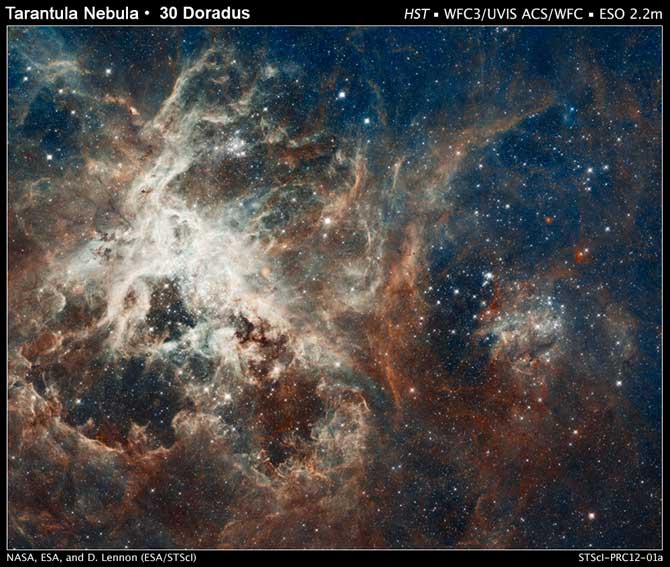 Several million young stars are vying for attention in a new NASA Hubble Space Telescope image of a raucous stellar breeding ground in 30 Doradus, a star-forming complex located in the heart of the Tarantula nebula.

The new image comprises one of the largest mosaics ever assembled from Hubble photos and includes observations taken by Hubble's Wide Field Camera 3 and Advanced Camera for Surveys. NASA and the Space Telescope Science Institute (STScI) in Baltimore released the image today in celebration of Hubble's 22nd anniversary.

"Hubble is the world's premiere science instrument for making celestial observations, which allow us to unravel the mysteries of the universe," said John Grunsfeld, associate administrator for NASA's Science Mission Directorate in Washington and three-time Hubble repair astronaut. "In recognition of Hubble's 22nd birthday, the new image of the 30 Doradus region, the birth place for new stars, is more than a fitting anniversary image."

Collectively, the stars in the image are millions of times more massive than our sun. The image is roughly 650 light-years across and contains some rambunctious stars, including one of the fastest rotating stars and the highest velocity stars ever observed by astronomers.

The nebula is close enough to Earth that Hubble can resolve individual stars, giving astronomers important information about the stars' birth and evolution. Many small galaxies have more spectacular starbursts, but the Large Magellanic Cloud's 30 Doradus is one of the only star-forming regions that astronomers can study in detail. The star-birthing frenzy in 30 Doradus may be fueled partly by its close proximity to its companion galaxy, the Small Magellanic Cloud.

The image reveals the stages of star birth, from embryonic stars a few thousand years old and still wrapped in cocoons of dark gas, to behemoths that die young in supernova explosions. 30 Doradus churns out stars at a furious pace over millions of years. Hubble shows star clusters of various ages, from about 2 million to 25 million years old.

The region's sparkling centerpiece is a giant, young star cluster named NGC 2070, only 2 million to 3 million years old. Its stellar inhabitants number roughly 500,000. The cluster is a hotbed for young, massive stars. Its dense core, known as R136, is packed with some of the heftiest stars found in the nearby universe, weighing more than 100 times the mass of our sun.

The massive stars are carving deep cavities in the surrounding material by unleashing a torrent of ultraviolet light, which is winnowing away the enveloping hydrogen gas cloud in which the stars were born. The image reveals a fantastic landscape of pillars, ridges and valleys. Besides sculpting the gaseous terrain, the brilliant stars may be triggering a successive generation of offspring. When the ultraviolet radiation hits dense walls of gas, it creates shocks, which may generate a new wave of star birth.

The image was made using 30 separate fields, 15 from each camera. Both cameras made these observations simultaneously in October 2011. The colors in the image represent the hot gas that dominates regions of the image. Red signifies hydrogen gas and blue represents oxygen.

The Hubble Space Telescope is a project of international cooperation between NASA and the European Space Agency. NASA's Goddard Space Flight Center in Greenbelt, Md., manages the telescope. STScI conducts Hubble science operations. STScI is operated by the Association of Universities for Research in Astronomy, Inc., in Washington.

› Hubblesite.org
› Back To Top