Grow Text SizeShrink Text Size
Hubble Racks Up 10,000 Science Papers
NASA's Hubble Space Telescope has passed another milestone in its 21 years of exploration: the 10,000th refereed science paper has been published. This makes Hubble one of the most prolific astronomical endeavors in history. 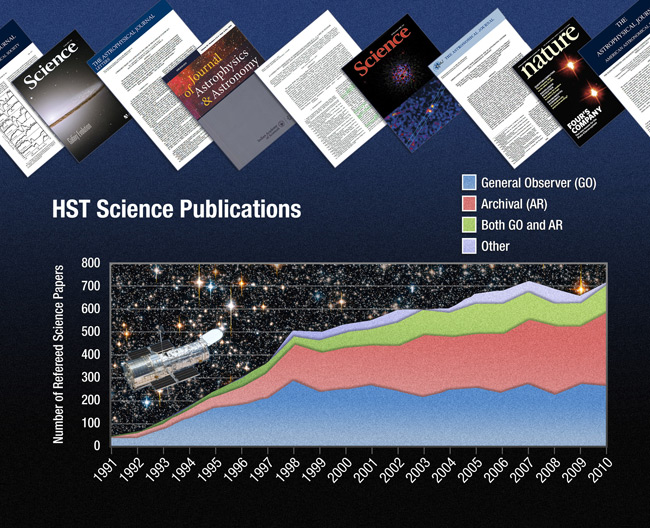 NASA's Hubble Space Telescope has passed another milestone in its 21 years of exploration: the 10,000th refereed science paper has been published. This makes Hubble one of the most prolific astronomical endeavors in history. Credit: NASA, ESA, and A. Feild (STScI)
› Larger image

For the past 21 years thousands of astronomers around the world in over 35 countries have been engaged in Hubble research. Outside of the United States, the top five nations publishing the most Hubble findings are the United Kingdom, Germany, Italy, France, and Spain.

The papers are based on Hubble observations that cover nearly every frontier in astronomy. The five top referenced science papers are, in order: the search for distant supernovae used to characterize dark energy; the precise measurement of the universe's rate of expansion; the apparent link between galaxy mass and central black hole mass; early galaxy formation in the Hubble Deep Field; and the evolutionary models for low-mass stars and brown dwarfs.

The 10,000th paper's lead author is Zach Cano of the Astrophysics Research Institute, Liverpool John Moores University, Liverpool, United Kingdom. He reports on the identification of the faintest supernova ever associated with a long-duration gamma-ray burst -- an intense gusher of high-energy radiation following the death of a star.

As typical of many Hubble programs, this involved collaborative observations with other observatories. The gamma-ray burst was first detected on March 16, 2010, by NASA's Swift high-energy space telescope. The Faulkes Telescope South and the Gemini Telescope South joined Hubble in making parallel observations of the gamma-ray burst's location in visible and infrared light.

The number of science papers written based on Hubble archival data has increased to the point where it has eclipsed the number of papers resulting from new observations. Hubble's archive contains data from over 1 million exposures. This astronomical treasure trove will serve as a key "data mine" serving generations of astronomers for decades to come, long after Hubble has stopped operations.

The first science paper from a Hubble observation was submitted on October 1,1990, by Tod Lauer of the National Optical Astronomy Observatory in Tucson, Ariz. This paper reported observations of the environment around a suspected black hole in the core of galaxy NGC 7457.

Data from Hubble's longest operating camera, the Wide Field Planetary Camera 2 (which was active from 1994 to 2009), was used for nearly half of the papers. The next most highly ranking instrument is the Advanced Camera for Surveys, which was installed in 2002 and is still operating. This is followed by three other top-ranking instruments: the Space Telescope Imaging Spectrograph, the Near Infrared Camera and Multi-Object Spectrograph, and the Faint Object Spectrograph.

Unlike other space astrophysics programs, five space shuttle servicing missions to Hubble from 1993 to 2009 repaired various components of the telescope and upgraded it with ever more powerful instruments. This ensured an ongoing program of cutting-edge science spanning over two decades. With a suite of state-of-the-art science instruments Hubble is presently at its apex of scientific capability.