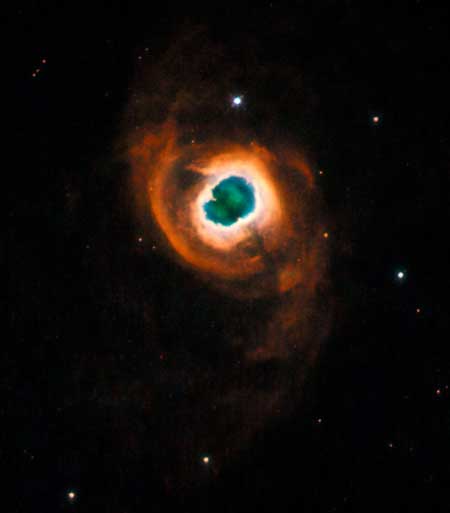 This planetary nebula is known as Kohoutek 4-55 (or K 4-55). It is one of a series of planetary nebulae that were named after their discoverer, Czech astronomer Lubos Kohoutek. A planetary nebula contains the outer layers of a red giant star that were expelled into interstellar space when the star was in the late stages of its life. Ultraviolet radiation emitted from the remaining hot core of the star ionizes the ejected gas shells, causing them to glow.

In the specific case of K 4-55, a bright inner ring is surrounded by a bipolar structure. The entire system is then surrounded by a faint red halo, seen in the emission by nitrogen gas. This multi-shell structure is fairly uncommon in planetary nebulae.

This Hubble image was taken by WFPC2 on May 4, 2009. The colors represent the makeup of the various emission clouds in the nebula: red represents nitrogen, green represents hydrogen, and blue represents oxygen. K 4-55 is nearly 4,600 light-years away in the constellation Cygnus.

The WFPC2 instrument, which was installed in 1993 to replace the original Wide Field/Planetary Camera, will be removed to make room for Wide Field Camera 3 during the upcoming Hubble Servicing Mission.

During the camera's amazing, nearly 16-year run, WFPC2 provided outstanding science and spectacular images of the cosmos. Some of its best-remembered images are of the Eagle Nebula pillars, Comet P/Shoemaker-Levy 9's impacts on Jupiter's atmosphere, and the 1995 Hubble Deep Field – the longest and deepest Hubble optical image of its time.

The scientific and inspirational legacy of WFPC2 will be felt by astronomers and the public alike, for as long as the story of the Hubble Space Telescope is told.