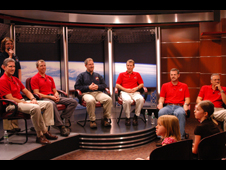 In addition to their daily briefings and hands-on training inside the world’s largest clean room at Goddard, several crew members took part in a virtual education event. STS-125 commander Scott Altman, pilot Gregory C. Johnson, and mission specialists John Grunsfeld, Mike Massimino, Michael Good, and Andrew Feustel participated in a NASA Digital Learning Network (DLN) session broadcast from the Goddard TV studio on April 30. The DLN connects students from across the country with educators and other special guests via videoconferencing, where students and NASA presenters can see and hear one another.

Hundreds of students from five middle schools located in Pennsylvania, New York, Texas and Washington sat patiently as each astronaut gave them a brief biography, then pre-selected students took turns asking their favorite astronaut a question. 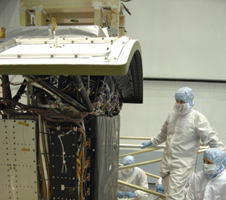 Astronauts John Grunsfeld and Andrew Feustel observe the Wide Field Camera 3 during training at Goddard. Credit: NASA
> Larger image In a thank you note to the crew, Jim Stofan, NASA’s deputy assistant administrator for education programs integration, said, “On behalf of the entire education team at NASA, I would like to thank each of you for participating in the NASA Digital Learning Network session ... We're receiving tremendous feedback on how inspiring you were and that you've sparked the imagination of hundreds of fifth graders.