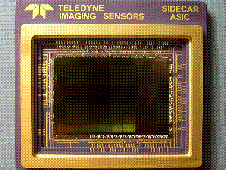 The Teledyne SIDECAR ASIC, shown here in its HST packaging before it was lidded, will be installed in the Advanced Camera for Surveys during SM4. Credit: Teledyne Imaging Systems
> Larger image Scientists and engineers now creating new technologies for NASA's James Webb Space Telescope have realized they can be used to enhance the Hubble's Advanced Camera for Surveys (ACS) in the upcoming servicing mission.

One piece of new technology astronauts will be installing in Hubble during Servicing Mission 4 in May, 2009 is a small, specialized integrated circuit called an Application-Specific Integrated Circuit, or ASIC, that enables an entire circuit board’s worth of electronics to be condensed into a very small package. It will be a part of the new Charge-Coupled Device (CCD) Electronics Box (CEB) that will be installed to repair the failed ACS instrument. The ASIC is used to read the voltages generated by instrument detectors and convert them to digital signals that are processed by the spacecraft’s electronics for transmission to the ground.

The ASIC design is the same as the one already developed and tested for the James Webb Space Telescope. However, the electronics packaging for Hubble is different because of the different operating conditions such as temperature and electronics environments.

How different are the thermal environments? Hubble is in low Earth orbit, approximately 350 miles above the Earth’s surface, while the Webb telescope will have an orbit one million miles from Earth. In addition, Webb uses infrared based cameras that will be adversely affected by heat given off by circuitry. ASIC consumes very low power, which helps keep the Webb telescope's science instruments cold. Hubble's ACS is sensitive to electromagnetic radiation at visible and ultraviolet wavelengths, but not infrared radiation. Its Charge-Coupled Device (CCD) detectors must also be cooled to minimize the background thermal noise produced by the warmth of the detector assemblies themselves. However, the CCD’s are not nearly as sensitive to heat as the James Webb infrared sensors.

The ASIC's technology has already been ground tested, as four of the tiny circuits were installed in early 2007 in the University of Hawaii's 2.2 meter telescope on Mauna Kea. Since then, they have been collecting science data and giving scientists experience in operating ASICs. Now, they're ready for their first trip into space on Hubble. 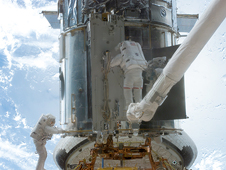 A team of astronauts perform upgrades on the telescope during a spacewalk in the 2002 servicing mission. One astronaut uses a handrail (left) to hold onto Hubble while the other is attached to the shuttle's robotic arm by a foot restraint (right). Credit: NASA
> Larger image Servicing Mission 4 (SM4) will be the last trip astronauts will make to repair and upgrade the Hubble Telescope. Over the course of five spacewalks, astronauts will install two new instruments, repair two inactive ones, and perform the component replacements that will keep the telescope functioning at least into 2014. The effort-intensive, rigorously researched, exhaustively tested mission also involves diverse groups of people on the ground throughout the country.

The installation of WFC3 and Cosmic Origins Spectrograph instruments on Hubble is one of the SM4 mission priorities. The WFC3 will study dark energy, the populations of stars in other galaxies beyond the Milky Way and remote galaxies previously beyond Hubble's vision. The capabilities of the ACS instrument are complementary and, to some extent, unique from WFC3. Having both instruments function together would give Hubble an extremely powerful imaging capability.

Why is this smaller new technology so important and useful to the repair of the ACS? - Because space for new technologies within the ACS is limited. In order to repair ACS in space, astronauts must first remove 4 printed-circuit electronics cards that comprise the original CEB. The new CEB circuit boards have to be smaller than the originals they replace and very easy to install by space-walking astronauts - thus the use of the smaller ASIC circuit. ASIC enables an entire circuit board’s worth of electronics to be condensed into a very small package.

But size isn't everything when it comes to ASIC. High performance capability, controllability and availability are other benefits of using this James Webb telescope technology in Hubble's ACS. The ASIC's performance and control benefits are in the fact that they can be completely re-programmed by commands from controllers on the ground, and the ACS can be fine-tuned for best performance. Since the ACS Repair task was a rapid development for the SM4 mission, the availability of an existing design that met the electronic requirements became an instant enabler.

The ASIC has already proven itself on the ground, and the Hubble will be proof of its excellent performance in space. Then, ASIC will take its next flight in the James Webb Space Telescope.