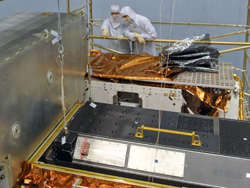 Astronauts were at the NASA Goddard Space Flight Center this past week for hands on training and daily briefings in preparation for next year's Shuttle mission to service the Hubble Space Telescope.

Image right: Astronauts watch while engineers inside the Goddard cleanroom pull the Cosmic Origins Spectrograph instrument from its protective enclosure. The spectrograph is scheduled to be installed on Hubble during Servicing Mission 4 in October 2008. Credit: NASA (+ Download Larger (1.4 Mb .jpg))

"These were long, eventful days for the crew and the Hubble team," said HST EVA Manager Mark Jarosz at Goddard. "The astronauts started each day with an overview of their proposed activities, followed by hours in the cleanroom observing actual hardware and perfecting their techniques."

Each training day closed with a 'de-brief' session outside the cleanroom where the astronauts and Hubble engineers discussed lessons learned. Each day here at Goddard is preparing them for the actual servicing mission, when the crew will perform five spacewalks to repair and upgrade the observatory.

The crew will make several trips to Goddard in the coming months with the same goal in mind – to get hands-on experience with the actual flight hardware and instruments. 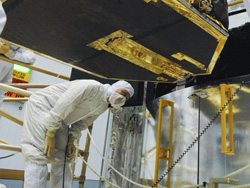 Image right: Astronaut John Grunsfeld checks clearances on the bottom of the Fine Guidance Sensor as it is being installed into the Hubble Mockup inside the Goddard cleanroom. This sensor is also slated to be installed during Servicing Mission 4. Credit: NASA (+ Download Larger (1.5 Mb .jpg))

"Having access to the hi-fidelity simulators in the cleanroom makes all the difference in the world to the crew," said Mike Weiss, HST deputy program manager for technical at Goddard. "When the astronauts train in our facility they gain invaluable insight into the tasks that lie ahead of them. It's just one more way the Center contributes to Hubble’s continued success."