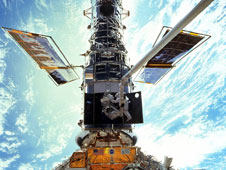 Astronauts work on Hubble during Servicing Mission 3b in March 2002. Credit: NASA
› Servicing Mission Trailer
› Servicing Mission Animation
NASA scientists and a space shuttle astronaut today outlined details of a challenging mission that will repair and upgrade the Hubble Space Telescope in 2008. The Hubble servicing mission, designated STS-125, will equip the orbiting observatory with far greater capabilities than ever had before to explore the nature and history of our universe.

Space Shuttle Atlantis is scheduled to lift off in October with a crew of seven astronauts and a cargo of equipment, tools and new instruments on the fifth and final mission to service the venerable telescope, which orbits 350 miles above the Earth. The shuttle also will carry an IMAX camera to record the historic mission for a film scheduled for release in 2010.

At the winter meeting of the American Astronomical Society, Alan Stern, associate administrator for the Science Mission Directorate at NASA Headquarters, Washington, said, "Hubble is, without exaggeration, a national treasure, and all of NASA is looking forward to seeing it receive this tune up and upgrade. I think Americans are going to be excited when they see the results of this exciting shuttle mission flower into new discoveries about the solar system and the larger universe we live in. And let's face it; it doesn't get much more exciting than sending a team of astronauts and sophisticated high-tech instruments to make the Hubble better than it ever was before."
› Read the press release
› Presenters Slides (11 Mb PDF)

The 11-day shuttle mission features five spacewalks. During those spacewalks, astronauts will install two powerful new science instruments, a new set of the gyroscopes that help stabilize the telescope, and batteries and thermal blankets to extend Hubble's operational life until at least 2013. Also, if all goes well, a degrading Fine Guidance Sensor unit, one of three aboard Hubble, will be replaced with a refurbished unit to help maintain the telescope's ability to point and focus on astronomical objects throughout the universe.

"The opportunity to go back to Hubble is more than a dream come true."

-- John Grunsfeld, lead spacewalker. "As both an astronaut and an astronomer, the opportunity to go back to Hubble is more than a dream come true," said John Grunsfeld, who will be the mission's lead spacewalker. "This mission promises to be quite challenging. NASA has put together the most experienced Hubble crew ever, with three Hubble veterans. The crew and mission team are in full throttle training, looking forward to launch and the hard work of servicing Hubble."

Astronauts will attempt the first ever on-orbit repair of two existing instruments - the Space Telescope Imaging Spectrograph (STIS) and the Advanced Camera for Surveys (ACS). The ACS was the most-used instrument on the telescope until its failure last January after five years of operations. The STIS - the most sophisticated spectrograph ever on Hubble - took detailed pictures of celestial objects and separated light into its components to diagnose the physical conditions of galaxies, stars, planets and nebulae. 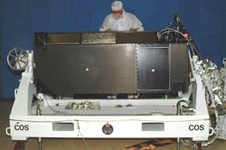 The Cosmic Origins Spectrograph instrument undergoes testing to ensure it will perform as required. Astronauts will install the instrument during Servicing Mission 4 to the Hubble Space Telescope. Credit: NASA
› More on the Servicing Mission The new instruments to be installed on the telescope are the Cosmic Origins Spectrograph, or COS, and the Wide Field Camera 3, or WFC3. Among its many goals, COS will probe the "cosmic web." This large-scale structure of the universe has its form determined by the gravity of dark matter and can be traced by galaxies and intergalactic gas. COS also will explore how this web has evolved over billions of years and the role it plays in the formation and evolution of galaxies. The WFC3 will be Hubble's first "panchromatic" camera, providing wide field-of-view and remarkably sharp images over a wide range of colors to supplement other imaging capabilities aboard the Hubble.

"Our goal for this mission is to leave Hubble at the apex of its scientific capabilities," said David Leckrone, Hubble senior project scientist at NASA's Goddard Space Flight Center, Greenbelt, Md. "Our two new instruments, plus the hoped-for repairs of STIS and ACS, will give astronomers a full 'tool box' with which to attack some really profound problems, ranging from the nature of dark matter and dark energy, to the chemical composition of the atmospheres of planets around other stars."

Scientists are confident that some of Hubble's greatest discoveries are yet to come.

"With the new capabilities we expect to have after this shuttle servicing mission, I fully expect Hubble's most impressive accomplishments to lie in its future, eclipsing even its well-known past successes," Stern said.