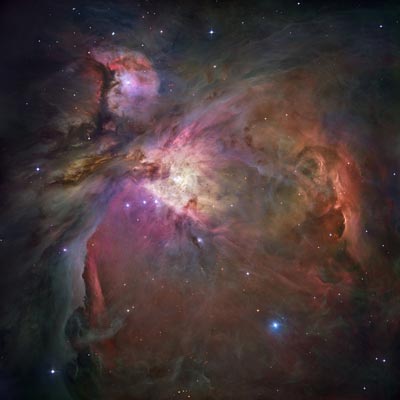 In one of the most detailed astronomical images ever produced, NASA's Hubble Space Telescope captured an unprecedented look at the Orion Nebula. This turbulent star formation region is one of astronomy's most dramatic and photogenic celestial objects. More than 3,000 stars of various sizes appear in this image. Some of them have never been seen in visible light. These stars reside in a dramatic dust-and-gas landscape of plateaus, mountains, and valleys that are reminiscent of the Grand Canyon. The Orion Nebula is a picture book of star formation, from the massive, young stars that are shaping the nebula to the pillars of dense gas that may be the homes of budding stars.
Image credit: NASA,ESA, M. Robberto (Space Telescope Science Institute/ESA) and the Hubble Space Telescope Orion Treasury Project Team