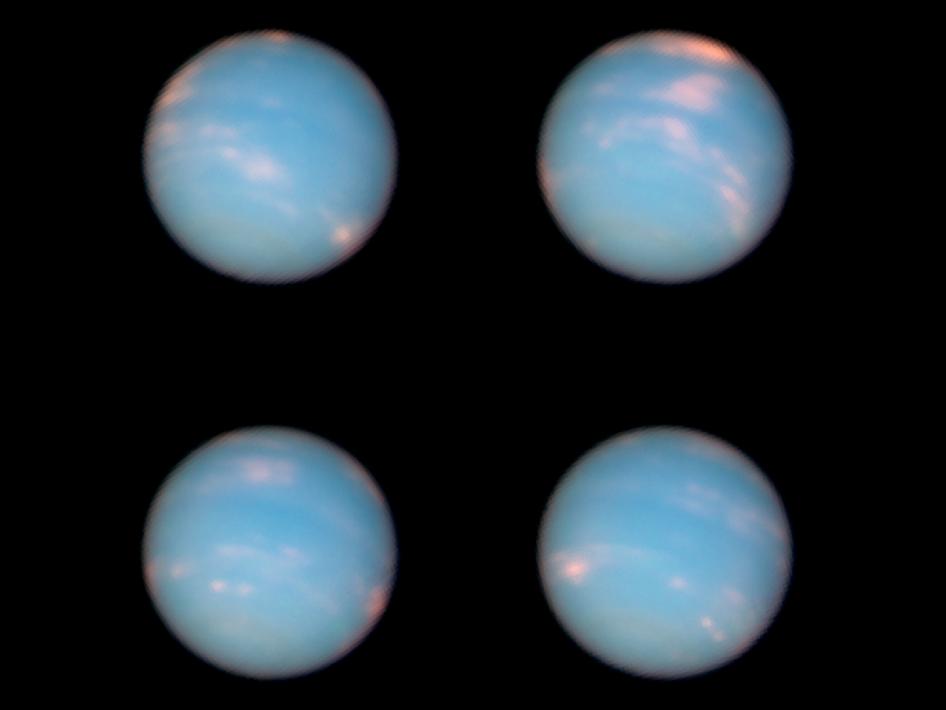 These four images of Neptune were taken by NASA's Hubble Space Telescope during the planet's 16-hour rotation. The snapshots were taken at roughly four-hour intervals, offering a full view of the blue-green planet. Today marks Neptune's first orbit around the Sun since it was discovered nearly 165 years ago. These images were taken to commemorate the event.

The Hubble images, taken with the Wide Field Camera 3 on June 25-26, 2011, reveal high-altitude clouds in the northern and southern hemispheres. The clouds are composed of methane ice crystals. In the Hubble images, absorption of red light by methane in Neptune's atmosphere gives the planet its distinctive aqua color. The clouds look pink because they are reflecting near-infrared light. A faint, dark band near the bottom of the southern hemisphere is probably caused by a decrease in the hazes in the atmosphere that scatter blue light. The band was imaged by NASA's Voyager 2 spacecraft in 1989, and may be tied to circumpolar circulation created by high-velocity winds in that region. Neptune is the most distant major planet in our solar system. German astronomer Johann Galle discovered the planet on September 23, 1846. At the time, the discovery doubled the size of the known solar system. The planet is 2.8 billion miles (4.5 billion kilometers) from the Sun, 30 times farther than Earth. Under the sun's weak pull at that distance, Neptune plods along in its huge orbit, slowly completing one revolution approximately every 165 years.