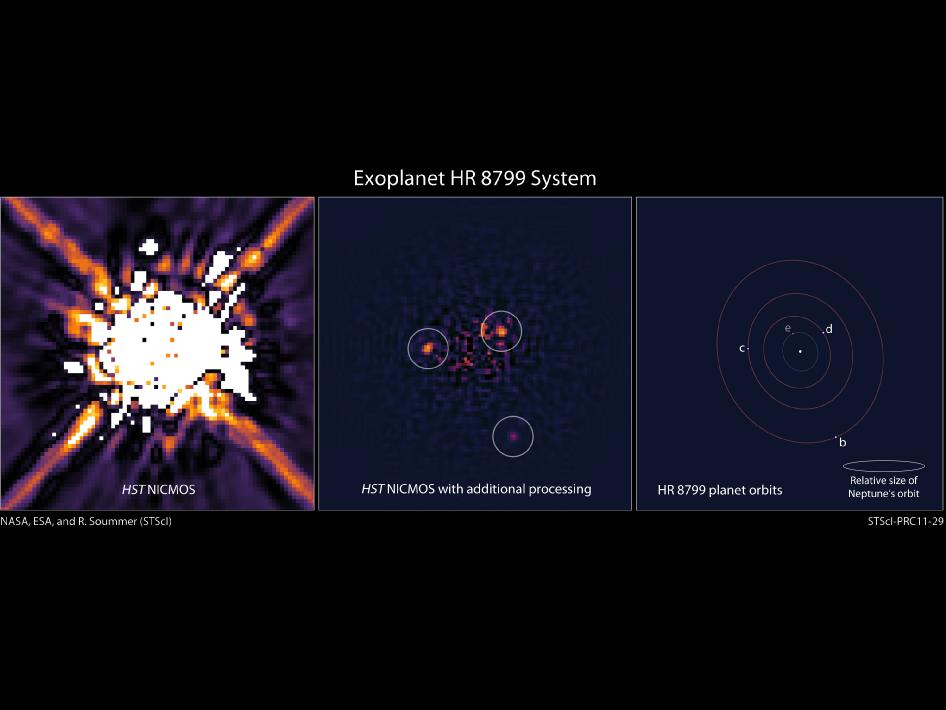 Left: This is an image of the star HR 8799 taken by Hubble's Near Infrared Camera and Multi-Object Spectrometer (NICMOS) in 1998. A mask within the camera (coronagraph) blocks most of the light from the star. In addition, software has been used to digitally subtract more starlight. Nevertheless, scattered light from HR 8799 dominates the image, obscuring any details.

Center: Recent, sophisticated software processing of the NICMOS data removes most of the scattered starlight to reveal three planets orbiting HR 8799. The positions of these planets coincide with orbits of planets observed by ground-based telescopes in 2007 and 2008.

Right: This is an illustration of the HR 8799 exoplanet system based on the reanalysis of Hubble NICMOS data and ground-based observations. The positions of the star and the orbits of the four known planets are shown schematically. The size of the dots is not to scale with their true size. The three outermost planets, a, b, and c are detected in both the NICMOS and ground-based data. A fourth, inner planet, e was detected in ground-based observations. The orbits appear elongated because of a slight tilt of the plane of the orbits relative to our line of sight. The size of the HR 8799 planetary system is comparable to our solar system, as indicated by the orbit of Neptune, shown to scale.