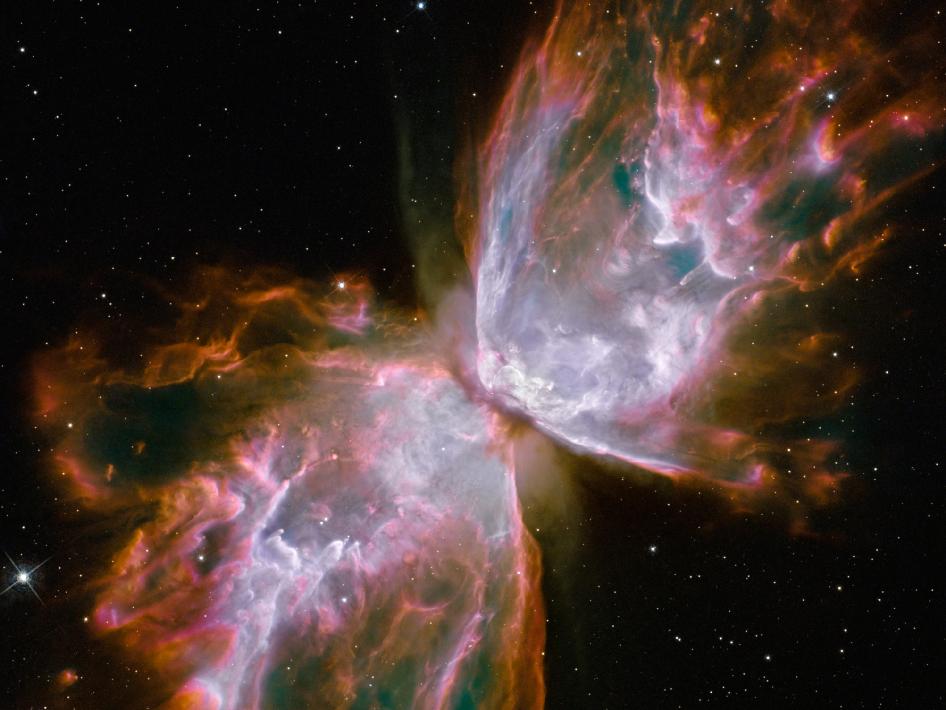 This celestial object looks like a delicate butterfly. But it is far from serene.

What resemble dainty butterfly wings are actually roiling cauldrons of gas heated to more than 36,000 degrees Fahrenheit. The gas is tearing across space at more than 600,000 miles an hour -- fast enough to travel from Earth to the moon in 24 minutes!

A dying star that was once about five times the mass of the Sun is at the center of this fury. It has ejected its envelope of gases and is now unleashing a stream of ultraviolet radiation that is making the cast-off material glow. This object is an example of a planetary nebula, so-named because many of them have a round appearance resembling that of a planet when viewed through a small telescope.

The Wide Field Camera 3 (WFC3), a new camera aboard NASA’s Hubble Space Telescope, snapped this image of the planetary nebula, catalogued as NGC 6302, but more popularly called the Bug Nebula or the Butterfly Nebula. WFC3 was installed by NASA astronauts in May 2009, during the servicing mission to upgrade and repair the 19-year-old Hubble telescope.

NGC 6302 lies within our Milky Way galaxy, roughly 3,800 light-years away in the constellation Scorpius. The glowing gas is the star’s outer layers, expelled over about 2,200 years. The "butterfly" stretches for more than two light-years, which is about half the distance from the Sun to the nearest star, Alpha Centauri.

The central star itself cannot be seen, because it is hidden within a doughnut-shaped ring of dust, which appears as a dark band pinching the nebula in the center. The thick dust belt constricts the star’s outflow, creating the classic "bipolar" or hourglass shape displayed by some planetary nebulae.

The WFC3 image reveals a complex history of ejections from the star. The star first evolved into a huge red-giant star, with a diameter of about 1,000 times that of our Sun. It then lost its extended outer layers. Some of this gas was cast off from its equator at a relatively slow speed, perhaps as low as 20,000 miles an hour, creating the doughnut-shaped ring. Other gas was ejected perpendicular to the ring at higher speeds, producing the elongated "wings" of the butterfly-shaped structure. Later, as the central star heated up, a much faster stellar wind, a stream of charged particles travelling at more than 2 million miles an hour, plowed through the existing wing-shaped structure, further modifying its shape.

The image also shows numerous finger-like projections pointing back to the star, which may mark denser blobs in the outflow that have resisted the pressure from the stellar wind.

The nebula's outer edges are largely due to light emitted by nitrogen, which marks the coolest gas visible in the picture. WFC3 is equipped with a wide variety of filters that isolate light emitted by various chemical elements, allowing astronomers to infer properties of the nebular gas, such as its temperature, density, and composition.

The white-colored regions are areas where light is emitted by sulfur. These are regions where fast-moving gas overtakes and collides with slow-moving gas that left the star at an earlier time, producing shock waves in the gas (the bright white edges on the sides facing the central star). The white blob with the crisp edge at upper right is an example of one of those shock waves.

NGC 6302 was imaged on July 27, 2009 with Hubble’s Wide Field Camera 3 in ultraviolet and visible light. Filters that isolate emissions from oxygen, helium, hydrogen, nitrogen, and sulfur from the planetary nebula were used to create this composite image.

These Hubble observations of the planetary nebula NGC 6302 are part of the Hubble Servicing Mission 4 Early Release Observations.