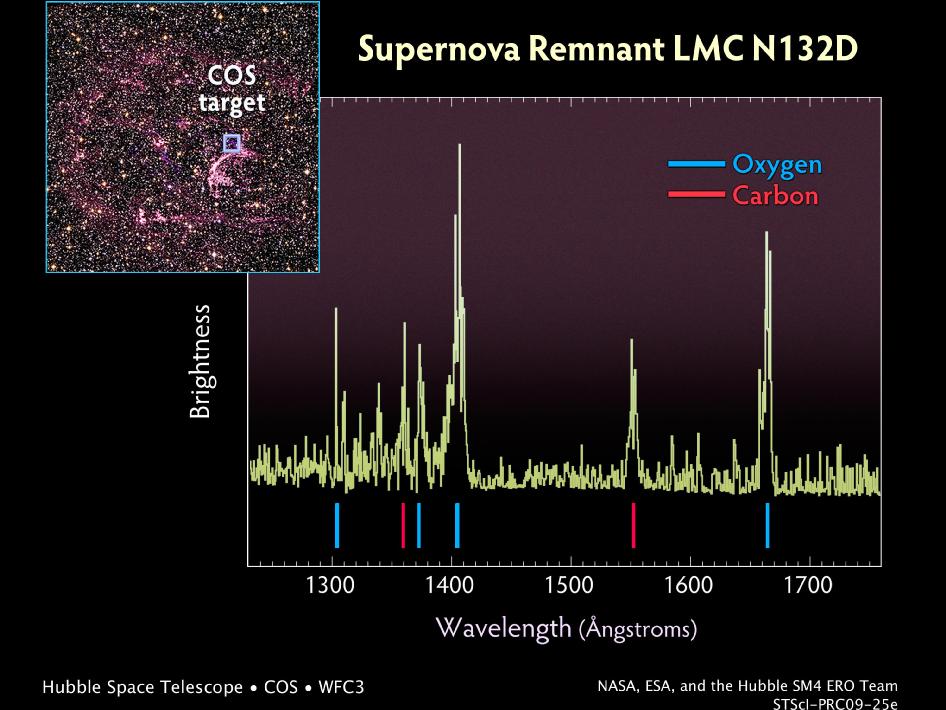 The wispy, glowing, magenta structures in this NASA Hubble Space Telescope image are the remains of a star 10 to 15 times the mass of the Sun that we would have seen exploding as a supernova 3,000 years ago. The remnant’s fast-moving gas is plowing into the surrounding gas of the galaxy, creating a supersonic shock wave in the surrounding medium and making the material glow.

The Hubble visible-light image reveals, deep within the remnant, a crescent-shaped cloud of pink emission from hydrogen gas and soft purple wisps that correspond to regions of glowing oxygen. A dense background of colorful stars is also visible.

Probing this tattered gaseous relic, the newly installed Cosmic Origins Spectrograph (COS) aboard NASA’s Hubble Space Telescope detected pristine gas ejected by the doomed star that has not yet mixed with the gas in the interstellar medium. The supernova remnant, called N132D, resides in the Large Magellanic Cloud, a small companion galaxy of the Milky Way located 170,000 light-years away. The resulting spectrum, taken in ultraviolet light, shows glowing oxygen and carbon in the remnant.

These results allow astronomers to better understand why some stars form an abundance of certain elements, like oxygen, but not others.

Ultraviolet light is blocked by the Earth’s atmosphere, so the observation of N132D in the ultraviolet requires the use of the space-borne Hubble telescope. The broadest range of spectral signatures of the glowing gas appear in the ultraviolet, allowing astronomers to determine the quantities, or abundances, of key elements such as oxygen, as well as elements whose abundances cannot be traced from visible-light images, including carbon, magnesium, and silicon. Previous ultraviolet instruments on Hubble were not sensitive enough to distinguish between the unmixed ejecta and the “shocked” gas of the surrounding interstellar medium.

Supernova remnants provide a rare opportunity to search for the material hidden deep inside a star. This in turn yields information on how stars evolve and how they manufacture chemicals in their interiors. Supernova explosions also enrich the interstellar medium with new chemical elements which are incorporated into future generations of stars.

The COS observations were made on Aug. 10, 2009. COS was installed by NASA astronauts in May 2009, during the servicing mission to upgrade and repair the 19-year-old Hubble telescope.

The visible-light image was taken on August 2, 2009 with Hubble’s new Wide Field Camera 3 (WFC3). A filter that isolates emission from sulfur was combined with archival data from the Advanced Camera for Surveys (ACS). The ACS data include color filters that sample starlight in the blue, green, and red portions of the spectrum, as well as the pink emission from glowing hydrogen gas.

These Hubble observations of the N132D are part of the Hubble Servicing Mission 4 Early Release Observations.