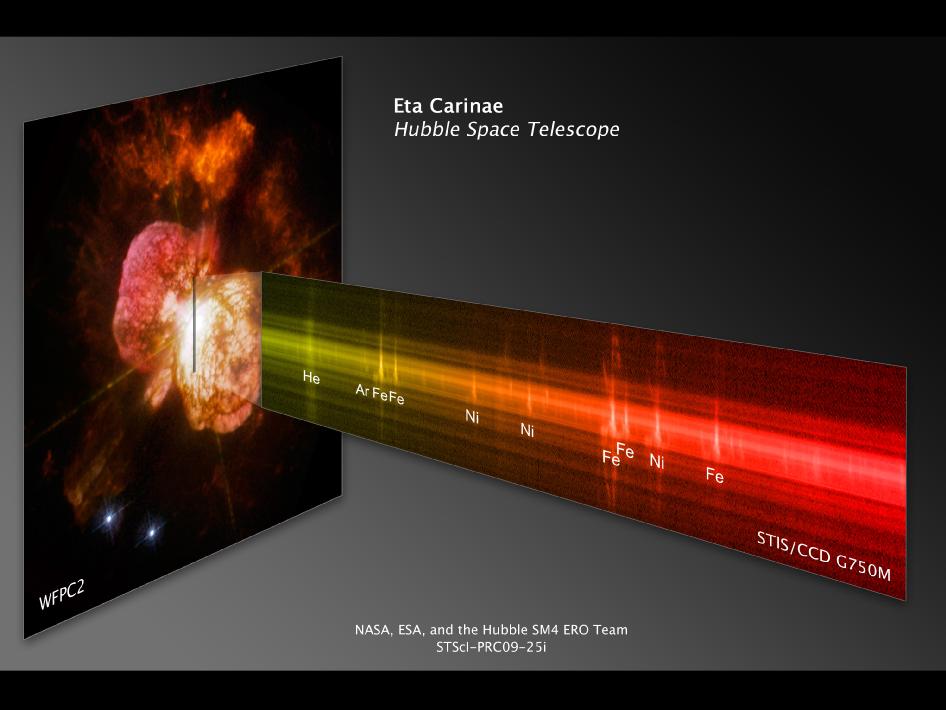 The signature balloon-shaped clouds of gas blown from a pair of massive stars called Eta Carinae have tantalized astronomers for decades. Eta Carinae has a volatile temperament, prone to violent outbursts over the past 200 years.

Observations by the newly repaired Space Telescope Imaging Spectrograph (STIS) aboard NASA’s Hubble Space Telescope reveal some of the chemical elements that were ejected in the eruption seen in the middle of the 19th century.

STIS analyzed the chemical information along a narrow section of one of the giant lobes of gas. In the resulting spectrum, iron and nitrogen define the outer boundary of the massive wind, a stream of charged particles, from Eta Car A, the primary star. The amount of mass being carried away by the wind is the equivalent one sun every thousand years. While this "mass loss" may not sound very large, in fact it is an enormous rate among stars of all types. A very faint structure, seen in argon, is evidence of an interaction between winds from Eta Car A and those of Eta Car B, the hotter, less massive, secondary star.

Eta Car A is one of the most massive and most visible stars in the sky. Because of the star’s extremely high mass, it is unstable and uses its fuel very quickly, compared to other stars. Such massive stars also have a short lifetime, and we expect that Eta Carinae will explode within a million years.

Eta Carinae was first catalogued by Edmund Halley in 1677. In 1843 Eta Carinae was one of the brightest stars in the sky. It then slowly faded until, in 1868, it became invisible in the sky. Eta Carinae started to brighten again in the 1990s and was again visible to the naked eye. Around 1998 and 1999 its brightness suddenly and unexpectedly doubled.

Eta Carinae is 7,500 light-years away in the constellation Carina.

The Hubble observations are part of the Hubble Servicing Mission 4 Early Release Observations. NASA astronauts repaired STIS during a servicing mission in May to upgrade and repair the 19-year-old Hubble telescope.