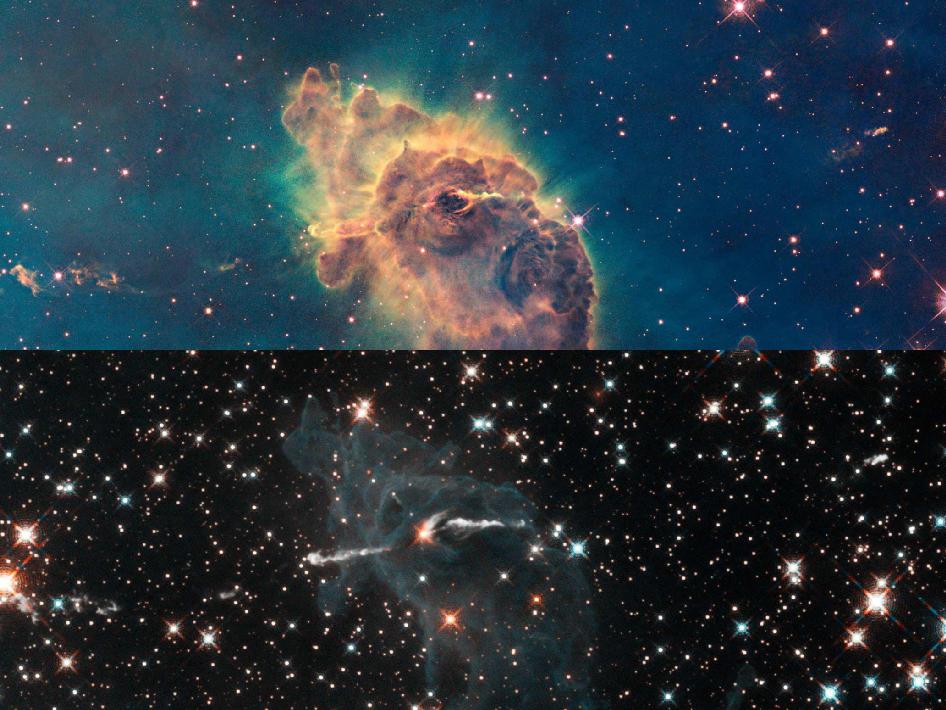 These two images of a huge pillar of star birth demonstrate how observations taken in visible and in infrared light by NASA's Hubble Space Telescope reveal dramatically different and complementary views of an object.

The pictures demonstrate one example of the broad wavelength range of the new Wide Field Camera 3 (WFC3) aboard the Hubble telescope, extending from ultraviolet to visible to infrared light.

Composed of gas and dust, the pillar resides in a tempestuous stellar nursery called the Carina Nebula, located 7,500 light-years away in the southern constellation Carina. The pair of images shows that astronomers are given a much more complete view of the pillar and its contents when distinct details not seen at visible wavelengths are uncovered in near-infrared light.

The top image, taken in visible light, shows the top of the 3-light-year-long pillar, bathed in the glow of light from hot, massive stars off the top of the image. Scorching radiation and fast winds (streams of charged particles) from these stars are sculpting the pillar and causing new stars to form within it. Streamers of gas and dust can be seen flowing off the top of the structure.

Nestled inside this dense structure are fledgling stars. They cannot be seen in this image because they are hidden by a wall of gas and dust. Although the stars themselves are invisible, one of them is providing evidence of its existence. Thin puffs of material can be seen traveling to the left and to the right of a dark notch in the center of the pillar. The matter is part of a jet produced by a young star. Farther away, on the left, the jet is visible as a grouping of small, wispy clouds. A few small clouds are visible at a similar distance on the right side of the jet. Astronomers estimate that the jet is moving at speeds of up to 850,000 miles an hour. The jet's total length is more than 15 light-years.

In the image at bottom, taken in infrared light, the dense column and the surrounding greenish-colored gas all but disappear. Only a faint outline of the pillar remains. By penetrating the wall of gas and dust, the infrared vision of WFC3 reveals the infant star that is probably blasting the jet. Part of the jet nearest the star is more prominent in this view. These features can be seen because infrared light, unlike visible light, can pass through the dust.

Other infant stars inside the pillar also appear to emerge. Three examples are the bright star almost directly below the jet-producing star, a fainter one to its right, and a pair of stars at the top of the pillar. Winds and radiation from some of the stars are blowing away gas from their neighborhoods, carving out large cavities that appear as faint dark holes.

Surrounding the stellar nursery is a treasure chest full of stars, most of which cannot be seen in the visible-light image because dense gas clouds veil their light. Many of them are background stars.

Hubble's Wide Field Camera 3 observed the Carina Nebula July 24 through July 30, 2009. WFC3 was installed aboard Hubble in May 2009 during Servicing Mission 4. The composite image was made from filters that isolate emission from iron, magnesium, oxygen, hydrogen, and sulfur.

These Hubble observations of the Carina Nebula are part of the Hubble Servicing Mission 4 Early Release Observations.