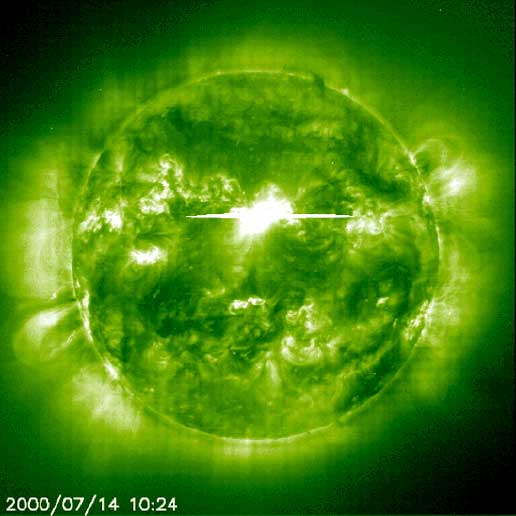 A powerful solar flare was seen on July 14, 2000, and captured in this image by the Solar and Heliospheric Observatory (SOHO) satellite. The image shows many complex active regions and loops of magnetism on the solar surface. The bright spot near the center is the light from the flare event. This flare was classified as X-5, among the most powerful flares categorized. There are three categories of flares, X-class, M-class and C-class. The largest, X-class flares are major events that can trigger planet-wide radio blackouts and long-lasting radiation storms. M-class flares are medium-sized, capable of causing brief radio blackouts that affect Earth's polar regions. Minor radiation storms sometimes follow an M-class flare. Compared to X- and M-class events, C-class flares are small with few noticeable consequences here on Earth.

Image credit: SOHO is a project of International cooperation between ESA and NASA.