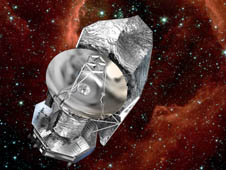 Artist concept of Herschel. Image credit: ESA – D. Ducros, 2009
Full image and caption Herschel is a European Space Agency mission with significant participation from NASA. It was launched into space from French Guiana in May of 2009, and now orbits a distant point, called the second Lagrange point of our Earth-sun system, about 1.5 million kilometers (930,000 miles) away. Herschel is the largest infrared space telescope ever flown, with a mirror 3.5 meters (11.5 feet) in diameter. It measures infrared light, as does NASA's Spitzer Space Telescope, but the two observatories only partially overlap. Herschel is optimized to detect longer wavelengths in the so-called far-infrared and submillimeter ranges.

Herschel can see the coldest and dustiest objects in space; for example, cool cocoons where stars form and dusty galaxies just starting to bulk up with new stars. The observatory will sift through star-forming clouds -- the "slow cookers" of star ingredients -- to trace the path by which potentially life-forming molecules, such as water, form.

NASA played a key role in the development of two of the mission's three instruments, and will make important contributions to data and science analyses. NASA's Jet Propulsion Laboratory in Pasadena, Calif., developed and built the "spider web" bolometers for Herschel's spectral and photometric imaging receiver (SPIRE) instrument, which are 40 times more sensitive than previous versions. It also developed and built mixers, local oscillator chains and power amplifiers for the heterodyne instrument for the far infrared (HIFI).

The NASA Herschel Science Center, part of the Infrared Processing and Analysis Center at the California Institute of Technology, also in Pasadena, has contributed science planning and data analysis software. The United States astronomical community, with the support of the NASA Herschel Science Center, competes for time on Herschel and thus will contribute greatly to the mission's science.
› Back To Top