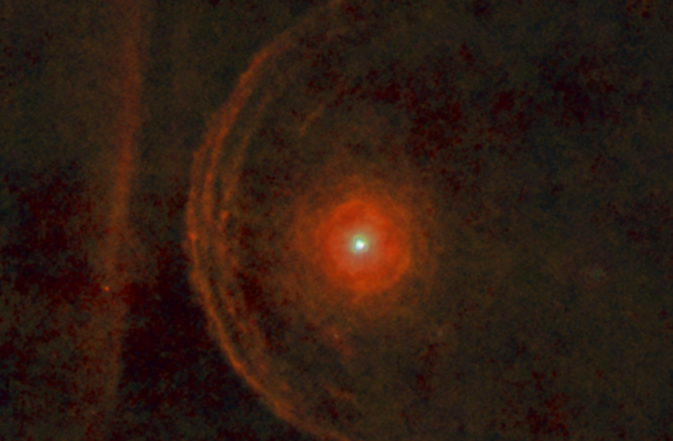 Orion, the famous hunter presiding over northern winter skies, may experience a stellar crash in its future. The red star at its shoulder, called Betelgeuse, appears to be set to collide with a dusty "wall" in 5,000 years.

A new image from the Herschel Space Observatory, a European Space Agency mission with important NASA participation, reveals the shedding, aging star -- called Betelgeuse - is located near an odd, linear bar of material. While some earlier theories proposed that this bar was a result of matter ejected during a previous stage of the star's evolution, analysis of the new image suggests that it is a separate object: either a linear filament linked to the galaxy's magnetic field, or the edge of a nearby interstellar cloud that is being illuminated by Betelgeuse.

If the bar is completely separate from the star, then the outermost arc around Betelgeuse is estimated to collide with the bar in just 5,000 years, with the star itself hitting the bar about 12,500 years later.

Roughly 1,000 times the diameter of our sun and shining 100,000 times more brightly, Betelgeuse is likely on its way to a spectacular supernova explosion. It has already swelled into a red supergiant and shed a significant fraction of its outer layers.

The new, longer-wavelength infrared view from Herschel also shows how the star's winds are crashing against the surrounding interstellar medium, creating a bow shock as the star moves through space at speeds of around 30 kilometers per second (about 67,000 mph).

A series of broken, dusty arcs around the star, and ahead of the direction of its motion, testify to a turbulent history of mass loss in past years.