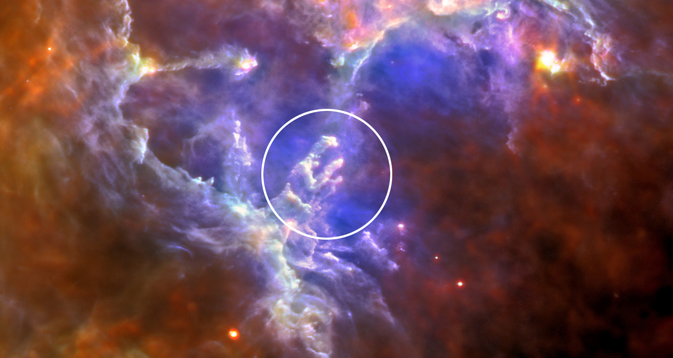 The Herschel Space Observatory captured this image of the Eagle nebula, with its intensely cold gas and dust. The "Pillars of Creation," made famous by NASA'S Hubble Space Telescope in 1995, are seen inside the circle. Image credit: ESA/Herschel/PACS/SPIRE/Hill, Motte, HOBYS Key Programme Consortium
› Larger view       › Full image and caption 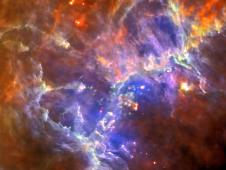 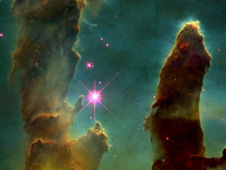 The "Pillars of Creation" in the Eagle nebula, as seen by NASA's Hubble Space Telescope in 1995. Image credit: NASA/ESA/STScI/Arizona State University
› Larger view

In 1995, NASA's Hubble Space Telescope took an iconic image of the Eagle nebula, dubbed the "Pillars of Creation," highlighting its finger-like pillars where new stars are thought to be forming. Now, the Herschel Space Observatory has a new, expansive view of the region captured in longer-wavelength infrared light.

The Herschel mission is led by the European Space Agency, with important NASA contributions.

The Eagle nebula is 6,500 light-years away in the constellation of Serpens. It contains a young, hot star cluster, NGC6611, visible with modest backyard telescopes, which is sculpting and illuminating the surrounding gas and dust. The result is a huge, hollowed-out cavity and pillars, each several light-years long.

The new Herschel image shows the pillars and the wide field of gas and dust around them. Captured in far-infrared wavelengths, the image allows astronomers to see inside the pillars and structures in the region. Herschel's image also makes it possible to search for young stars over a much wider region, and come to a much fuller understanding of the creative and destructive forces inside the Eagle nebula.