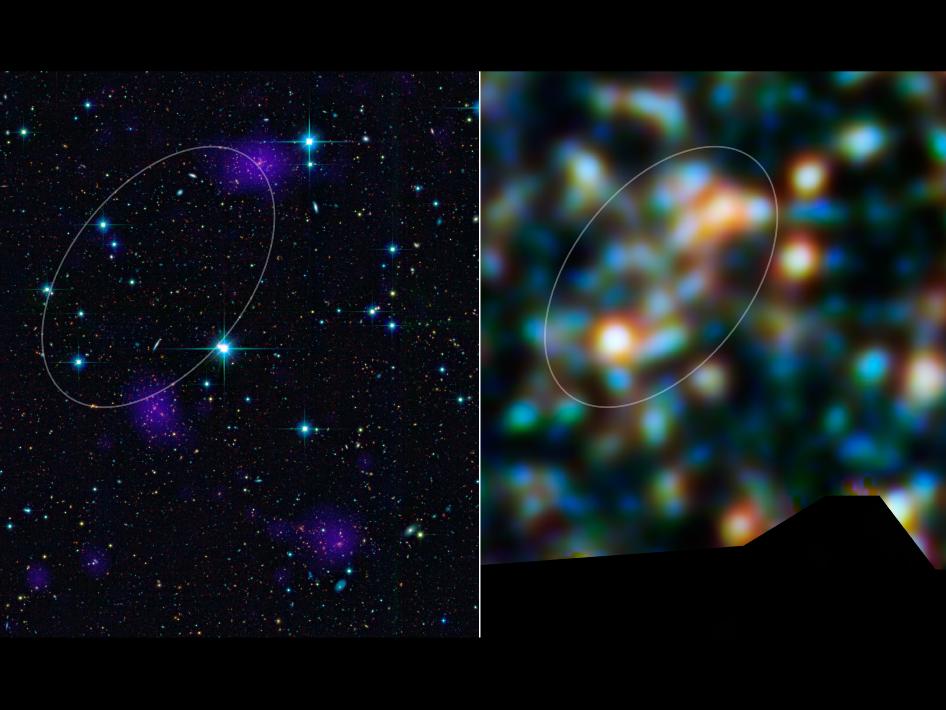 The Herschel Space Observatory has discovered a giant, galaxy-packed filament ablaze with billions of new stars. The filament connects two clusters of galaxies that, along with a third cluster, will smash together in several billion years and give rise to one of the largest galaxy superclusters in the universe.

The three galaxy clusters of the emerging supercluster, known as RCS2319, are seen in visible and X-ray light (purple) to the left. Observations by Herschel in infrared light appear to the right, with colored regions indicating greater infrared emissions. A white circle broadly outlines the 8 million light-year-long intergalactic filament in each image.

In visible light, the filament does not stand out because dust obscures the star-formation activity in distant galaxies. Telescopes like Herschel, however, can detect the infrared glow of this dust as it is heated by newborn stars.

The amount of infrared light suggests that the galaxies in the filament are cranking out the equivalent of about 1,000 new Suns in terms of mass per year. For comparison's sake, our Milky Way galaxy is producing about one Sun's mass-worth of new stars per year.

Notably, the third galaxy cluster is off the edge of the image on the right. The reason behind this apparent snub is that the original research proposal called for making a map centered on the top cluster. During the observing run, astronomers did not know the filament existed, so its eventual discovery serves as a nice example of scientific serendipity. The team is now aiming to perform further follow-up observations to examine the filament in more detail.