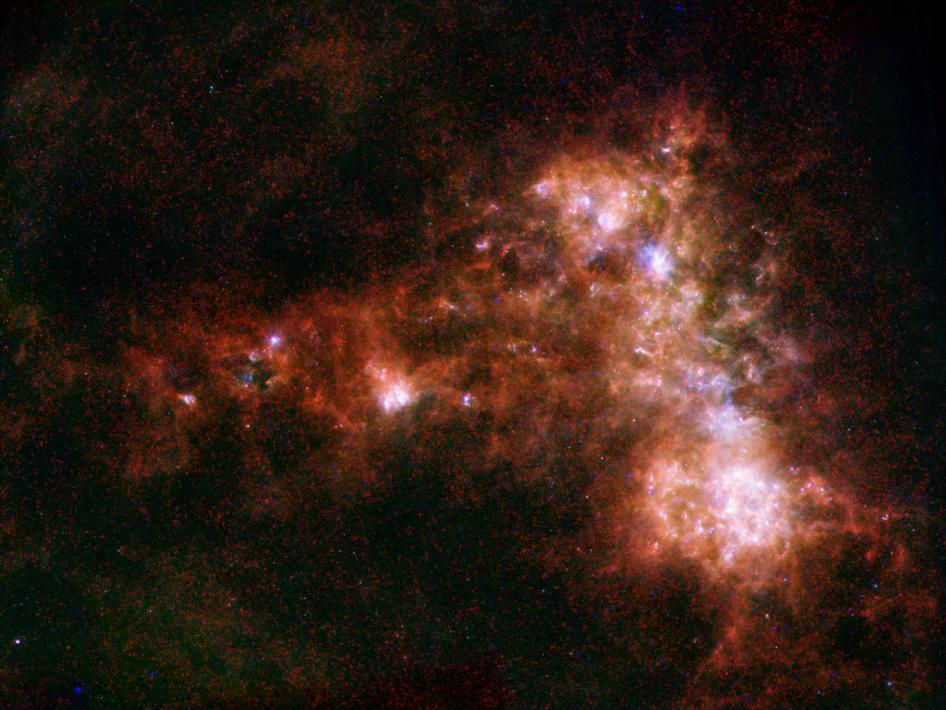 This new image shows the Small Magellanic Cloud galaxy in infrared light from the Herschel Space Observatory a European Space Agency-led mission with important NASA contributions, and NASA’s Spitzer Space Telescope. The Large and Small Magellanic Clouds are the two biggest satellite galaxies of our home galaxy, the Milky Way, though they are still considered dwarf galaxies compared to the big spiral of the Milky Way.

In combined data from Herschel and Spitzer, the irregular distribution of dust in the Small Magellanic Cloud becomes clear. A stream of dust extends to the left in this image, known as the galaxy's "wing," and a bar of star formation appears on the right.

The colors in this image indicate temperatures in the dust that permeates the Cloud. Colder regions show where star formation is at its earliest stages or is shut off, while warm expanses point to new stars heating surrounding dust. The coolest areas and objects appear in red, corresponding to infrared light taken up by Herschel's Spectral and Photometric Imaging Receiver at 250 microns, or millionths of a meter. Herschel's Photodetector Array Camera and Spectrometer fills out the mid-temperature bands, shown here in green, at 100 and 160 microns. The warmest spots appear in blue, courtesy of 24- and 70-micron data from Spitzer.