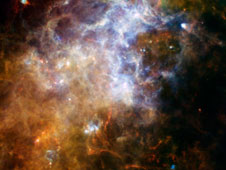 The new composite picture features a dark and cool region of our Milky Way galaxy, where material is just beginning to be stirred together into new batches of stars. Much of this region would appear dark in visible-light views, but Herschel can see the very dim infrared glow of cold dust that is only slightly warmer than the coldest temperature theoretically attainable. Herschel's view reveals that this star-forming region is even richer in cold and turbulent material than previously believed.

"Herschel's infrared vision lets us sense the feeble heat from some of the coldest objects in the cosmos," said Paul Goldsmith, the NASA project scientist for the mission at NASA's Jet Propulsion Laboratory, Pasadena, Calif.

Herschel is still in what is called the performance verification phase, in which its instruments are being fine-tuned and checked out. Some routine science observations have begun. 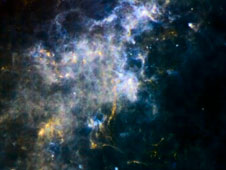 This image from the Herschel Observatory reveals some of the coldest and darkest material in our galaxy. The yellow filaments show the coldest dust dotted with the youngest embryonic stars. Image credit: ESA/NASA/JPL-Caltech
Full image and caption


The new image is a combination of data taken with Herschel's photodetector array camera and spectrometer, and its spectral and photometric imaging receiver. By using these two instruments at the same time, Herschel won't need to use as much of its stored liquid coolant, a limited resource expected to last about three-and-a-half years.

In the color-coded image, blue shows warmer dust and red, the coolest, with green representing temperatures in between. The coldest dust can be seen as thin filaments. It is here that stars are in the very earliest stages of their infancy, and can be seen lined up together like glittering beads of water on a blade of grass.

More images like this are expected in the future and will ultimately help astronomers map the "terra incognita," or unknown land, of our Milky Way, as well as other galaxies that are farther away. 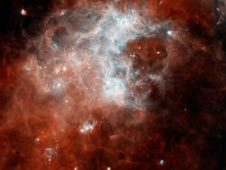 In this infrared view from the Herschel Observatory, blue shows the warmest dust, and red, the coolest. The choppy clouds of gas and dust are just starting to condense into new stars. Image credit: ESA/NASA/JPL-Caltech
Full image and caption


More information about NASA's role in the mission is at http://www.herschel.caltech.edu/ .