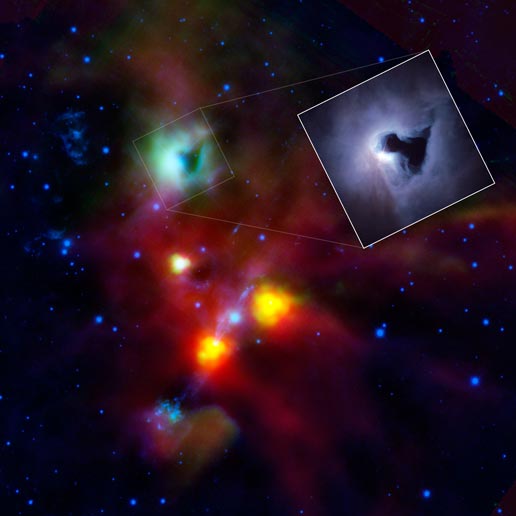 The dark hole seen in the green cloud at the top of this image was likely carved out by multiple jets and blasts of radiation. The hole was originally thought to be a really dark cloud, but this new infrared picture from the Herschel space observatory and the National Optical Astronomy Observatory on Kitt Peak near Tucson, reveals that the dark spot is actually a gap in a "nest" of gas and dust containing fledgling stars.

An older picture of the hole captured in visible light by NASA's Hubble Space Telescope is shown as an inset. At the time the picture was taken, astronomers thought the hole was a dark cloud. When Herschel looked in its direction to study nearby young stars, astronomers were surprised to see the cloud continued to look black, which shouldn't have been the case. Herschel's infrared eyes are designed to see into such clouds.

The glowing, green cloud around the hole is called NGC 1999. It contains a fairly bright star, called V38O Ori, which is heating up the dust and creating the bright greenish glow. V380 Ori is a triple star system - one of these three stars appears to have launched a jet that helped clear the hole, as well as other jets and stellar radiation.

The red, filamentary glow extending through the middle of the image is a cloud of cold, dense gas and dust -- the raw material from which new stars are forming. Three new, embryonic stars can bee seen as the triangle of orangish, yellow-white spots. Bipolar jets are visible streaming out of one of these stars in blue. The dark region below and to the right of the top orange-white star of the triangle is thought to be another hole carved by jets from the star. This possible hole is not yet lit up by a star, as is the case with the hole seen above it.