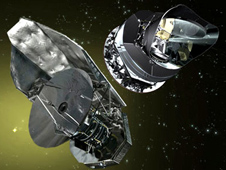 Artist concept of Herschel / Planck. Image credit: ESA PASADENA, Calif. -- Two missions to study the cosmos, Herschel and Planck, are scheduled to blast into space May 14 aboard the same Ariane 5 rocket from the Guiana Space Center in French Guiana. The European Space Agency, or ESA, leads both missions, with significant participation from NASA.

"The missions are quite different, but they'll hitch a ride to space together," said Ulf Israelsson, NASA project manager for both Herschel and Planck. "Launch processing is moving along smoothly. Both missions' instruments have completed their final checkouts, and the spacecrafts' thruster tanks have been fueled."

Israelsson is with NASA's Jet Propulsion Laboratory, Pasadena, Calif., which contributed key technology to both missions. NASA team members will play an important role in data analysis and science operations.

The Herschel observatory has the unique ability to peek into the dustiest and earliest stages of planet, star and galaxy growth. The spacecraft's astronomy mirror -- about 3.5 meters (11.5 feet) in diameter -- is the largest ever launched into space. It will collect longer-wavelength light in the infrared and submillimeter range -- light never before investigated by an astronomy mission.

"We haven't had ready access to the wavelengths between infrared and microwaves before, in part because our Earth's atmosphere blocks them from reaching the ground. We will now have access to these wavelengths thanks to Herschel's large, cold telescope in space, and its detectors' improved sensitivity," said Paul Goldsmith, the NASA project scientist for Herschel at JPL. "Because our views were so limited before, we can expect a vast range of serendipitous discoveries, from new molecules in interstellar space to new types of objects."

The coolest objects in the universe, such as dusty, developing stars and galaxies, appear as dark blobs when viewed with visible-light telescopes, so astronomers don't know what's happening inside them. But at longer wavelengths in the far-infrared and submillimeter range, cool objects perk up and shine brightly. Herschel will detect light from objects as cold as minus 263 degrees Celsius, or 10 Kelvin, which is 10 degrees above the coldest temperature theoretically attainable. To do this, the observatory's instruments must be cold, too. Onboard liquid helium, which is expected to last more than three-and-a-half years, will chill the coldest of Herschel's detectors to a frosty 0.3 Kelvin.

Planck has a different goal. It will answer fundamental questions about how the universe came to be, and how it will change in the future. It will look back in time to just 400,000 years after our universe exploded into existence nearly 14 billion years ago in an event known as the Big Bang. The mission will spend at least 15 months making the most precise measurements yet of light at microwave wavelengths across our entire sky -- including what's known as the cosmic microwave background. This microwave light has even longer wavelengths than what Herschel will see, but it's not from cool objects. In this case, the light is from the hot, primordial soup of particles that eventually evolved to become our modern-day universe. The light has traveled nearly 14 billion years to reach us, and, in that time, has cooled and stretched to longer wavelengths because space is expanding.

"The cosmic microwave background shows us the universe directly at age 400,000 years, not the movie, not the historical novel, but the original photons," said Charles Lawrence, NASA project scientist for Planck at JPL. "Planck will give us the clearest view ever of this baby universe, showing us the results of physical processes in the first brief moments after the Big Bang, and the starting point for the formation of stars, galaxies, and clusters of galaxies. The clear view is a result of Planck's unprecedented combination of sensitivity, angular resolution, or sharpness, and frequency coverage."

Like Herschel, Planck will be cold; in fact, one of its instruments will be cooled to just 0.1 Kelvin. But it won't carry liquid coolant. Instead, it will chill itself with innovative "cryocooler" technology, developed in part by JPL.

Both spacecraft have been mated to their rocket and are being readied for launch. Shortly after liftoff, they will separate from the rocket and follow different trajectories. By two months later, the missions will have made their way to their final, distinct orbits around the second Lagrangian point of the Earth-sun system, a point in space 1.5 million kilometers (930,000 miles) from Earth, or four times farther from Earth than the moon. This point is on the other side of Earth from the sun, providing the spacecraft with dark, expansive views of the sky. It is also far enough away that the heat from Earth and the moon won't warm up the telescopes.

Herschel is a European Space Agency mission, with science instruments provided by a consortium of European-led institutes, and with important participation by NASA. NASA's Herschel Project Office is based at JPL. JPL contributed mission-enabling technology for two of Herschel's three science instruments. The NASA Herschel Science Center, part of the Infrared Processing and Analysis Center at the California Institute of Technology in Pasadena, supports the United States astronomical community. Caltech manages JPL for NASA. More information is online at http://www.nasa.gov/herschel and http://herschel.caltech.edu .