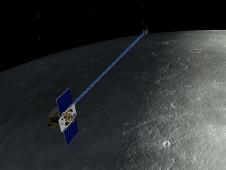 An artist’s depiction of the twin spacecraft that comprise NASA’s Gravity Recovery And Interior Laboratory (GRAIL) mission. During the GRAIL mission’s science phase, spacecraft (Ebb and Flow) transmit radio signals precisely defining the distance between them as they orbit the moon in formation. Image credit: NASA/JPL-Caltech/MIT
› Full image and caption

The act of two or more aircraft flying together in a disciplined, synchronized manner is one of the cornerstones of military aviation, as well as just about any organized air show. But as amazing as the U.S. Navy's elite Blue Angels or the U.S. Air Force's Thunderbirds are to behold, they remain essentially landlocked, anchored if you will, to our planet and its tenuous atmosphere. What if you could take the level of precision of these great aviators to, say, the moon?

"Our job is to ensure our two GRAIL spacecraft are flying a very, very accurate trail formation in lunar orbit," said David Lehman, GRAIL project manager at NASA's Jet Propulsion Laboratory in Pasadena, Calif. "We need to do this so our scientists can get the data they need."

Essentially, trail formation means one aircraft (or spacecraft in this case), follows directly behind the other. Ebb and Flow, the twins of NASA's GRAIL (Gravity Recovery And Interior Laboratory) mission, are by no means the first to synch up altitude and "air" speed while zipping over the craters, mountains, hills and rills of Earth's natural satellite. That honor goes to the crew of Apollo 10, who in May 1969 performed a dress rehearsal for the first lunar landing. But as accurate as the astronauts aboard lunar module "Snoopy" and command module "Charlie Brown" were in their piloting, it is hard to imagine they could keep as exacting a position as Ebb and Flow. "It is an apples and oranges comparison," said Lehman. "Lunar formation in Apollo was about getting a crew to the lunar surface, returning to lunar orbit and docking, so they could get back safely to Earth. For GRAIL, the formation flying is about the science, and that is why we have to make our measurements so precisely."

As the GRAIL twins fly over areas of greater and lesser gravity at 3,600 mph (5,800 kilometers per hour), surface features such as mountains and craters, and masses hidden beneath the lunar surface, can influence the distance between the two spacecraft ever so slightly.

How slight a distance change can be measured by the science instrument beaming invisible microwaves back and forth between Ebb and Flow?

How about one-tenth of one micron? Another way to put it is that the GRAIL twins can detect a change in their position down to one half of a human hair (0.000004 inches, or 0.00001 centimeters). For those of you who are hematologists or vampires (we are not judging here), any change in separation between the two twins greater than one half of a red corpuscle will be duly noted aboard the spacecraft's memory chips for later downlinking to Earth. Working together, Ebb and Flow will make these measurements while flying over the entirety of the lunar surface.

This begs the question, why would scientists care about a change of distance between two spacecraft as infinitesimal as half a red corpuscle a quarter million miles from Earth?

"Mighty oaks from little acorns grow – even in lunar orbit," said Maria Zuber, principal investigator of the GRAIL mission from the Massachusetts Institute of Technology, Cambridge. "From the data collected during these minute distance changes between spacecraft, we will be able to generate an incredibly high-resolution map of the moon's gravitational field. From that, we will be able to understand what goes on below the lunar surface in unprecedented detail, which will in turn increase our knowledge of how Earth and its rocky neighbors in the inner solar system developed into the diverse worlds we see today."

Getting the GRAIL twins into a hyper-accurate formation from a quarter million miles away gave the team quite a challenge. Launched together on Sept. 10, 2011, Ebb and Flow went their separate ways soon after entering space. Three-and-a-half months and 2.5 million miles (4 million kilometers) later, Ebb entered lunar orbit. Flow followed the next day (New Year's Day 2012).

"Being in lunar orbit is one thing, being in the right lunar orbit for science can be something else entirely," said Joe Beerer, GRAIL's mission manager from JPL. "The twins initial orbit carried them as close to the lunar surface as 56 miles (90 kilometers) and as far out as 5,197 miles (8,363 kilometers), and each revolution took approximately 11.5 hours to complete. They had to go from that to a science orbit of 15 by 53 miles (24.5 by 86 kilometers) and took all of 114 minutes to complete."

To reduce and refine Ebb and Flow's orbits efficiently and precisely required the GRAIL team to plan and execute a series of trajectory modification burns for each spacecraft. And each maneuver had to be just right.

"Because each one of these maneuvers was so important, we did a lot of planning and testing for each," said Beerer. "Over eight weeks, we did nine maneuvers with Ebb and 10 with Flow to establish the science formation. We would literally be watching our screens for a signal telling us about an Ebb rocket burn, then go into a meeting about the next burn for Flow. Our schedule was very full."

Today, the calendar for GRAIL's flight team remains a busy one with the day-to-day operations of keeping NASA's lunar twins in synch. But as busy as the team gets, they still have time to peer skyward.

"Next time you look up and see the moon, you might want to take a second and think about our two little spacecraft flying formation, zooming from pole to pole at 3,600 mph," said Lehman. "They're up there, working together, flying together, getting the data our scientists need. As far as I'm concerned, they're putting on quite a show."

NASA's Jet Propulsion Laboratory in Pasadena, Calif., manages the GRAIL mission for NASA's Science Mission Directorate, Washington. The Massachusetts Institute of Technology, Cambridge, is home to the mission's principal investigator, Maria Zuber. The GRAIL mission is part of the Discovery Program managed at NASA's Marshall Space Flight Center in Huntsville, Ala. Lockheed Martin Space Systems in Denver built the spacecraft. JPL is a division of the California Institute of Technology in Pasadena.

More information about the GRAIL mission is online at: http://www.nasa.gov/grail or http://grail.nasa.gov.