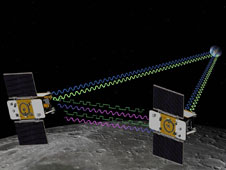 WASHINGTON -- NASA has a class assignment for U.S. students: help the agency give the twin spacecraft headed to orbit around the moon new names.

The naming contest is open to students in kindergarten through 12th grade at schools in the United States. Entries must be submitted by teachers using an online entry form. Length of submissions can range from a short paragraph to a 500-word essay. The entry deadline is Nov. 11. NASA's solar-powered Gravity Recovery And Interior Laboratory (GRAIL)-A and GRAIL-B spacecraft lifted off from Cape Canaveral Air Force Station, Fla. on Sept. 10 to begin a three-and-a-half-month journey to the moon. GRAIL will create a gravity map of the moon using two spacecraft that orbit at very precise distances. The mission will enable scientists to learn about the moon's internal structure and composition, and give scientists a better understanding of its origin. Accurate knowledge of the moon's gravity also could be used to help choose future landing sites. "A NASA mission to the moon is one of the reasons why I am a scientist today," said GRAIL Principal Investigator Maria Zuber from the Massachusetts Institute of Technology in Cambridge. "My hope is that GRAIL motivates young people today towards careers in science, math and technology. Getting involved with naming our two GRAIL spacecraft could inspire their interest not only in space exploration but in the sciences, and that's a good thing." Zuber and former astronaut Sally Ride of Sally Ride Science in San Diego will chair the final round of judging. Sally Ride Science is the lead for GRAIL's MoonKAM program, which enables students to task cameras aboard the two GRAIL spacecraft to take close-up views of the lunar surface. NASA's Jet Propulsion Laboratory in Pasadena, Calif., a division of the California Institute of Technology, manages the GRAIL mission. GRAIL is part of the Discovery Program managed at NASA's Marshall Space Flight Center in Huntsville, Ala. Lockheed Martin Space Systems in Denver built the spacecraft. For contest rules and more information, visit: http://grail.nasa.gov/contest The public can email questions to: grailcontest@jpl.nasa.gov For more information about GRAIL, visit: http://www.nasa.gov/grail For more information about MoonKAM, visit: https://moonkam.ucsd.edu/ DC Agle 818-393-9011
Jet Propulsion Laboratory, Pasadena, Calif.
agle@jpl.nasa.gov