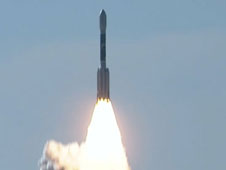 -- Engineers have received communications from both GRAIL spacecraft, and their solar arrays have deployed.

-- NASA's twin GRAIL spacecraft have successfully separated from the upper stage of their Delta II rocket. They are on their way to the moon.

"We are on our way, and early indications show everything is looking good," said David Lehman, GRAIL project manager at NASA's Jet Propulsion Laboratory in Pasadena, Calif. "We will know more about GRAIL's status in a few hours, after an opportunity to analyze telemetry and poll our mission controllers."

After GRAIL's ride aboard a United Launch Alliance Delta II rocket comes to an end, the spacecraft will be on a path that will reach the moon in three-and-a-half months.

JPL, a division of the California Institute of Technology, manages the GRAIL mission for NASA. The Massachusetts Institute of Technology, Cambridge, is home to the mission's principal investigator, Maria Zuber. The GRAIL mission is part of the Discovery Program managed at NASA's Marshall Space Flight Center in Huntsville, Ala. Lockheed Martin Space Systems, Denver, built the spacecraft. Launch management for the mission is the responsibility of NASA's Launch Services Program at the Kennedy Space Center in Florida.