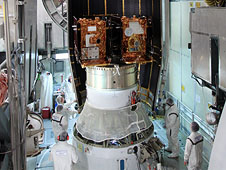 GRAIL's twin spacecraft are tasked for a nine-month mission to explore Earth's nearest neighbor in unprecedented detail. They will determine the structure of the lunar interior from crust to core and advance our understanding of the thermal evolution of the moon.

"Yesterday's final encapsulation of the spacecraft is an important mission milestone," said David Lehman, GRAIL project manager for NASA's Jet Propulsion Laboratory in Pasadena, Calif. "Our two spacecraft are now sitting comfortably inside the payload fairing which will protect them during ascent. Next time the GRAIL twins will see the light of day, they will be about 95 miles up and accelerating."

In lunar orbit, the spacecraft will transmit radio signals precisely defining the distance between them. Regional gravitational differences on the moon are expected to expand and contract that distance.

GRAIL scientists will use these accurate measurements to define the moon's gravity field. The data will allow mission scientists to understand what goes on below the surface of our natural satellite.

"GRAIL will unlock lunar mysteries and help us understand how the moon, Earth and other rocky planets evolved as well," said Maria Zuber, GRAIL principal investigator from the Massachusetts Institute of Technology in Cambridge.

For extensive pre-launch and launch day coverage of the GRAIL spacecraft, visit:
http://www.nasa.gov .

A prelaunch webcast for the mission will be streamed at noon on Wednesday, Sept. 7. Live countdown coverage through NASA's Launch Blog begins at 6:30 a.m. EDT (3:30 am PDT) on Sept. 8. Coverage features live updates as countdown milestones occur and streaming video clips highlighting launch preparations and liftoff.

To view the webcast and the blog or to learn more about the GRAIL mission, visit: http://www.nasa.gov/grail and http://grail.nasa.gov .

The launch will also be streamed live, with a chat available, on http://www.ustream.tv/nasajpl2  .