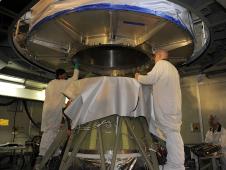 CAPE CANAVERAL, Fla. -- NASA's lunar-bound GRAIL twins were mated to their Delta II launch vehicle at the Cape Canaveral Air Force Station's Launch Complex 17 at 8:45 a.m. EDT (5:45 a.m. PDT) today. The 15-mile (25-kilometer) trip from Astrotech Space Operations in Titusville, Fla., is the last move for GRAIL before it begins its journey to the moon. NASA's dynamic duo will orbit the moon to determine the structure of the lunar interior from crust to core and to advance understanding of the thermal evolution of the moon.

"We are about to finish one chapter in the GRAIL story and open another," said Maria Zuber, GRAIL's principal investigator, based at the Massachusetts Institute of Technology in Cambridge. "Let me assure you this one is a real page-turner. GRAIL will rewrite the book on the formation of the moon and the beginning of us."

Now that the GRAIL spacecraft are atop their rocket, a final flurry of checks and tests can begin to confirm that all is go for launch. The final series of checks begins tomorrow, Aug. 19, with an on-pad functional test. The test is designed to confirm that the spacecraft is healthy after the fueling and transport operations. Next week, among all the upcoming final tests, reviews and closeout operations leading up to liftoff, the GRAIL team will install the launch vehicle fairing around the spacecraft.