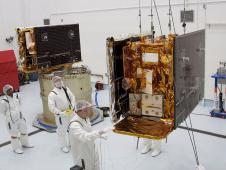 At Astrotech Space Operation's payload processing facility in Titusville, Fla., NASA's Gravity Recovery and Interior Laboratory-A (GRAIL-A) lunar probe is lifted from its workstand and across the clean room toward the spacecraft adapter ring, at left, where GRAIL-B is already secured. Image credit: NASA/KSC
› Full image and caption NASA's twin lunar probes – GRAIL-A and GRAIL-B - completed their final inspections and were weighed one final time at the Astrotech Space Operations facility in Titusville, Fla., on Tuesday. The two Gravity Recovery and Interior Laboratory (GRAIL) spacecraft will orbit the moon in formation to determine the structure of the lunar interior from crust to core and to advance understanding of the thermal evolution of the moon. GRAIL's launch period opens Sept. 8, 2011, and extends through Oct. 19. For a Sept. 8 liftoff, the launch window opens at 5:37 a.m. PDT (8:37 a.m. EDT) and remains open through 6:16 a.m. PDT (9:16 a.m. EDT).

Later this week, the two spacecraft will be loaded side-by-side on a special adapter and packaged inside a payload fairing that will protect them during their launch into space. Next week, GRAIL is expected to make the trip from Astrotech to Launch Complex 17 at the Cape Canaveral Air Force Station where it will be mated with its United Launch Alliance Delta II Heavy rocket.

GRAIL-A and GRAIL-B will fly in tandem orbits around the moon for several months to measure its gravity field in unprecedented detail. The mission will answer longstanding questions about Earth's moon, and provide scientists a better understanding of how Earth and other rocky planets in the solar system formed.